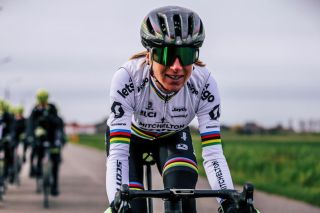 Annemiek van Vleuten (Mitchelton-Scott) completed a hat-trick of victories at the season restart in Spain this weekend, soloing to victory at Durango-Durango Emakumeen Saria on Sunday. The world champion cleared her rivals on the final climb of the Goiuria Gaina and descended into Durango alone with the win ahead of Anna van der Breggen (Boels-Dolmans) and Elisa Longo Borghini (Trek-Segafredo).

After being halted due to the COVID-19 coronavirus, the season restarted with three one-day races in the Basque Country where Van Vleuten also won Emakumeen Nafarroako Klasikoa on Thursday and Vuelta Ciclista a Navarra on Friday. It is her fourth consecutive victory in the rainbow jersey after winning Omloop Het Nieuwsblad in February.

“I cannot remember winning four-races in a row, actually five, because the world championships started it," Van Vleuten said in a team press release.

“I don’t want to be arrogant; it is unbelievable for me to win these three races; I cannot have believed this would have happened.

“I have to say Friday was the biggest surprise but today I knew the final so I knew if it stayed together then it would be good for me. It was a super steep climb which I know really well."

The third event of the one-day Spanish races, Durango-Durango Emakumeen Saria, offered the women’s peloton a 113km race held on a large circuit that included several intermediate sprints, and then two final climbs over the Goiuria Gaina at 100km and 110km, before descending to the finish line in Durango.

The race started fast with multiple attacks but nothing cleared the field as riders and teams pursued the intermediate sprints on the circuit. Tanja Erath (Canyon-SRAM) took full points at the sprints located at the 45km and 62km marks, while Italian champion Marta Bastianelli (Ale) emerged from the field to win the final intermediate sprint in Miotan.

The peloton then faced the Goiuria Gaina, which was always the most likely place for the race to split apart. The field tackled this climb twice, first through Berriz,  where the 4.9km ascent offered a fairly shallow average grade of 4.9 per cent but with sections as steep as 6 per cent near the top. The field then raced up it a second time, but through San Juan, which offered steeper sections of 11 and 17 per cent.

The first rider to clear the field came at the 88km mark (25km to go) after a strong attack from Ale BTC Ljubljana rider Maaike Boogaard. She gained 30 seconds and provided a perfect set-up for her teammate Mavi Garcia to bridge across to her on the lower slopes of the Goiuria Gaina.

It wasn’t long before a select group of 15 riders led by Van Vleuten caught up to the breakaway. Van Vleuten crested the climb first to take the full QOM points followed by Garcia and Clara Koppenburg (Equipe Paule Ka).

“Going into the final the team did a super good job with Moniek [Tenniglo] and Georgia [Williams] all the time controlling the bunch and that really helped me, so I didn’t have to-do any effort before the climb," Van Vleuten said. "Also, a big shout out to Amanda Spratt today, she was always offensive always there and it is always nice to see her there and we can go to Strade Bianche now with confidence."

Seventeen riders descended toward San Juan and the second and final climb over Goiuria Gaina. Van Vleuten made her winning move on the steeper slopes of the ascent and quickly gained 20 seconds, along with full mountain points, on a chasing van der Breggen. Meanwhile, Koppenburg put forth an impressive ride powering over the climb next ahead of Longo Borghini and Ashleigh Moolman-Pasio (CCC-Liv).

“I attacked at the start with the first steep part of the final climb and then Ashleigh Moolman-Pasio (CCC-Liv) surprised me with a really, really big attack, but actually I could follow her, then she blew half-way up the steep climb, so I could take over and go my own speed to the top," Van Vleuten said.

Van Vleuten held a small 10-second led on Van der Breggen over the top and down the descent with three kilometres to go. Van der Breggen wasn’t strong enough to close the gap to her compatriot and was forced to settle for second place as Van Vleuten took her third consecutive win in Spain.

“Anna was just behind me between 10 and 15 seconds so I had to go full gas on the descent. I had a bit of a flashback to La Course and last year in the Giro, so it was a really interesting fight between Anna and me. I could not relax on the descent or really enjoy it, but it was a beautiful final," she said.

“To win every race in the jersey; for sure I cannot keep this record but for now it is nice. At first, they wanted to interview me about the curse of the rainbow jersey, but I am really happy I don’t have that curse."