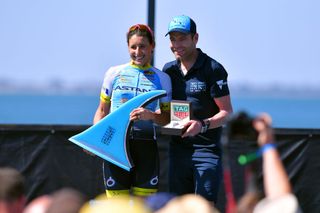 The Women's WorldTour will officially begin at the Cadel Evans Great Ocean Road Race, when the women's event called the Deakin University Elite Women's Road Race is held on Saturday, February 1. It is the first time the marquee series has started outside of Europe since its creation five years ago, but the race is expected to make a strong first-impression in Geelong, Australia.

It might be the first time that Australia has hosted a round of the WorldTour, but the nation has long held world-class road races for women. In fact, it hosted the first leg of the former UCI Women's World Cup one-day race series for 11 years between 1998 and 2008 in Sydney, Canberra, the Snowy Mountains and Geelong.

That Australian World Cup folded following the 2008 edition, and the series was replaced entirely in 2016 by the revamped Women's WorldTour, which brought together the world's best one-day races and stage races.

Australia has also hosted the UCI Road World Championships in 2010, in Geelong and Melbourne, and the 2000 Summer Olympic Games in Sydney.

In recent years, the Australian block of summer racing has included the Bay Crits, the Women's Tour Down Under and the new Race Torquay (January 30), followed by the Cadel Evans Great Ocean Road Race (February 1) and the Herald Sun Tour (February 5-6).

The UCI announced last June that the 2020 Women's WorldTour will start at the Cadel Evans Great Ocean Road Race. Since its inception in 2016, the series has traditionally begun in Italy at Strade Bianche, which will now mark the second round of the series in March.

Like the Santos Women's Tour Down Under, the Cadel Evans Great Ocean Road Race has also hit the mark when it comes to offering a world-class racing experience for an international women's peloton.

The race started as a 1.2 event in 2016, when Amanda Spratt (then Orica-AIS) won the inaugural edition. Her teammate Annemiek van Vleuten won the race the following year. The race moved up to 1.1 status in 2018, and Chloe Hosking (then Ale Cipollini) won the title, while Arlenis Sierra (Astana) won the race last year.

The Cadel Evans' Deakin University Elite Women's Road Race will start and finish in Geelong. The peloton will race one large loop for a total of 121km. When the peloton departs the Geelong waterfront, the riders will head south towards the Surf Coast.

Once on the coast along Great Ocean Road, they will contest an intermediate sprint in Torquay. They will then pass Bells Beach and turn off the Great Ocean Road to loop back to town where they will race up the Challambra Crescent Climb.

The climb is close to the finish, and it is short at 1.8km, but it has a seven per cent average gradient with pitches as steep as 17 per cent, which will make it the most decisive part of the race.

The peloton may very well be reduced to a small group after the climb, or perhaps a winning breakaway, that will contest the final in Geelong.

Arlenis Sierra will toe the start line as the defending champion alongside her Astana Women's Team that includes Francesca Pattaro, Katia Ragusa, Yeima Torres Beltran and Maryna Ivaniuk. But the Kazakh team will have to take on the higher-quality field now that the race has stepped up to the Women's WorldTour.

To go along along with the professional women's cycling reforms, the UCI announced eight new top-tier WorldTeams, and six of those teams will be competing on Saturday.

Winner of the inaugural event, Amanda Spratt, will be on the line with her Mitchelton-Scott team, which also includes Lucy Kennedy and Grace Brown.

Continental teams looking for success are Tibco-SVB, with the Australian time trial national champion Sarah Gigante, and Rally Cycling with Chloe Hosking, while Roxsolt-Attaquer will be led by Justine Barrow and the Kordamenta Australian National Team is led by Rachel Neylan.

Also on the start line are Italian team Bepink and Mexican team Agolico looking for success in Australia.