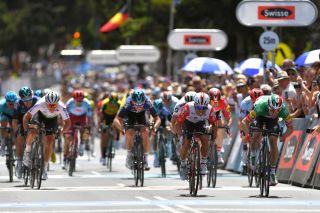 The men's WorldTour calendar opens with the Tour Down Under stage race in Adelaide in January, and is quickly followed in the first weekend of February by the Cadel Evans Great Ocean Road Race one-day race. It's a far cry from the traditional, European-centric season, with its cold beginnings but the riders definitely prefer the warmer southern hemisphere start to the season and the mondialisation of the sport has become unstoppable.

Many of those same riders enjoying the Australian summer will of course soon return to the chill of Europe, but they'll make the most of the sunshine as their stint in the sunshine moves from South Australia to Victoria, to Geelong and the Great Ocean Road for the Cadel Evans Great Ocean Road Race this weekend.

Following the conclusion of the Tour Down Under last week, won by Trek-Segafredo's Richie Porte, the racing continues with much of the same peloton, first at the Race Torquay 'warm-up event' on Thursday – won by Deceuninck-QuickStep's Sam Bennett – and then the main event, the 'Cadel Race', on Sunday.

A few of the men who competed in the Tour Down Under, including AG2R La Mondiale's Romain Bardet, have opted not to race an event that normally comes down to a bunch sprint – or at least a reduced bunch sprint – and have headed back to Europe early. However there's still a star-studded line-up that includes Mitchelton-Scott climber Simon Yates, who'll remain in Australia for the following week's Herald Sun Tour, and sprinters Caleb Ewan (Lotto Soudal), 2018 winner Jay McCarthy (Bora-Hansgrohe) and defending champion Elia Viviani (Cofidis).

Cyclingnews will have full coverage of the race from our Australian correspondent Ellis Bacon.

The last five editions of the race have proven that anything can happen on the 171km course, which takes the riders from the bay-side city of Geelong, some 75km south-west of Melbourne, to the Great Ocean Road on the shores of the Bass Strait, and back again.

After heading south to Barwon Heads, the adopted hometown of 2011 Tour de France winner Cadel Evans, the race then turns to the west along the stunning coastline, through Torquay, where the riders will have raced three days before, and the famous surfing venue of Bells Beach, before heading inland once more.

As the riders make their way back towards Geelong, they'll know that they still face three-and-a-half laps of a 16.6km finishing circuit that includes four ascents of the short-but-steep Challambra Crescent.

The climb was also used at the 2010 UCI Road World Championships, and is every bit as residential as its name suggests, bringing out the locals to watch the world's best riders struggle up the climb from the comfort of their front gardens.

Peter Kennaugh's solo win in 2016 for Team Sky was perhaps the most memorable edition, but equally thrilling was Elia Viviani's victory last year from what was a whittled-down 33-rider group that also contained eventual runner-up Caleb Ewan, third-placed Daryl Impey (Mitchelton-Scott) and Deceuninck-QuickStep's Michael Mørkøv, all of whom played principal roles at last week's Tour Down Under.

Mørkøv was on lead-out duty for Viviani there last year, and has to take a lot of credit for the Italian's win, but things have changed for 2020. Mørkøv now works for Irish road race champion Sam Bennett, who joined Deceuninck-QuickStep this season, while Viviani has moved to Cofidis for 2020, and is still looking for his first win of the year after crashing hard during stage 2 of the Tour Down Under.

While Bennett perhaps now tops the list of favourites having won a stage at the Tour Down Under ahead of victory at the Race Torquay on Thursday, Ewan dropped out of the latter race early.

That means that either the Australian sprinter's two stage wins at the Tour Down Under last week – plus his win at the earlier Schwalbe Classic criterium – have taken their toll, or, more likely, he's saving himself for the Challambra Crescent climbs on Sunday, dreaming about turning last year's second place into first.

Other names to look out for will be Giacomo Nizzolo of NTT Pro Cycling, fresh from his stage win in Victor Harbor at the Tour Down Under and second place at the Race Torquay behind Bennett, and road race world champion Mads Pedersen (Trek-Segafredo), who may find this long, tough race to his liking.

The Cadel Evans Great Ocean Road Race has had five different winners in five editions. Will that trend continue in 2020? We will find out on Sunday.