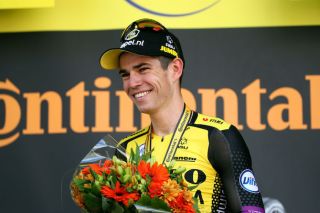 Jumbo-Visma's Wout van Aert is all smiles after having won stage 10 of the 2019 Tour de France (Image credit: Getty Images)

Jumbo-Visma's Wout van Aert appeared at the employment tribunal court in Mechelen, near Antwerp, Belgium, on Tuesday, as his former Veranda's Willems-Crelan team manager Nick Nuyens is requesting €1,110,000 in damages after Van Aert terminated his contract with the team.

Roompot-Charles team to fold at the end of 2019

Van Aert was under contract with Sniper Cycling – the Nuyens-owned holding company behind Veranda’s Willems-Crelan – for the 2019 season, but he unilaterally terminated that deal in September 2018 while the squad was negotiating its merger with Dutch team Roompot-Nederlandse Loterij.

Van Aert claimed that he knew nothing about the proposed merger, which did go ahead without Van Aert, forming the Roompot-Charles team for 2019. The Belgian was already contracted to join Dutch WorldTour team Jumbo-Visma in 2020, but was able to start riding for them a year early after terminating his Sniper Cycling contract.

Back in August 2018, Van Aert had explained how he had only found out about the merger after the deal had been done.

"Today, there was the press release saying that we'd merged with the Roompot team," Van Aert said last year. "I was only told about that [the merger] about five minutes before the official communiqué was sent out.

"Enough is enough. It's hard to believe that an employee can be treated like this in the 21st century," he said.

"I would find it very strange if I was made to pay that, but we'll have to wait for the verdict," said Van Aert, who won a stage at his debut Tour de France this year, but then crashed out in the individual time trial on stage 13, and is still recovering from his injuries.

"It wasn't anything to do with money; my career always came first. When I didn't respond to their contract proposal, I ended up in a situation in which I didn't want to find myself," he continued. "I was [going to be] placed in a completely new team, which I had never chosen.

"I didn't like that at all, but I was never listened to. How it all went led to a huge breach of trust. So there was no other option for us, as talking about it and coming up with a possible amicable solution was no longer an option," said Van Aert.

The judge in the case will determine whether the 25-year-old's reasons for terminating his contract were justified, with a verdict expected to be delivered on November 26.