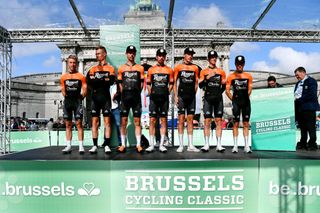 The Roompot-Charles team will disband at the end of the year, it was announced on Friday; the Dutch squad the latest of a number of Professional Continental teams destined to disappear at the of 2019.

Earlier this year, Dutch holiday company Roompot announced they would end their sponsorship at the end of 2019, and the team bosses have been unable to find a replacement.

“We’ve waited as long as possible to send this press release. After all, you keep hoping that a solution can be found somewhere, even though it seemed less likely by the day,” said team manager Michael Zijlaard in a statement on Friday.

Nippo-Vini Fantini set to fold at end of 2019

The team, which includes Lars Boom and Pieter Weening on its roster, will make their final bow at the Sluitingsprijs Putte-Kapellen on October 15, after racing the Tacx Pro Classic and Paris-Tours. Boom and Sean De Bie will race for the Charles cyclo-cross team in the final months of the year.

Roompot, a Dutch team, was launched at the start of 2015, while Belgian outfit Veranda's Willem-Crelan focused on cyclo-cross and ran a limited road programme, with Nick Nuyens as manager.

The teams joined forces for the 2019 season, Nuyens having initially attempted to arrange a merger with the former Irish Pro Continental squad Aqua Blue Sport. The negotiations caused a rift with Veranda's star rider, Wout van Aert, who managed to wrangle free of his 2019 contract to join Jumbo-Visma a year earlier than planned.

Without Van Aert, the team have managed three wins so far in 2019, and the project will come to an end, leaving a number of riders and staff seeking employment for next year.

Seven riders currently have contracts with other teams for 2020, including Stijn Steels, who will ride for Deceuninck-QuickStep. The others are Boy van Poppel, Maurits Lammertink, Oscar Riesebeek, Senne Leysen, Justin Timmermans and Nick van der Lijke.

“In the past few years, lots of riders were able to show their worth in our team colors. We’re proud that many of them have been able to switch to the WorldTour or other professional teams," said Nuyens.

"Now, several riders and staff members have already found a place for next year. We hope that everyone ends up well, we’ll guide them in their search for a new employer.”

Roompot-Charles are one of a number of teams disappearing at the end of the season, along with fellow Professional Continental outfits Euskadi-Murias in Spain and Nippo-Vini Fantini in Italy.

Israel Cycling Academy are taking over the WorldTour licence of Katusha-Alpecin and merging their rosters into one team, while Axel Merckx's Axeon Hagens Berman developement team are stepping down to Continental level, leaving two more holes in the Pro Conti ranks.

Two new Pro Conti team are expected in 2020, with the the Uno-X team from Norway stepping up from Continental level and the E-Powers Factory Team in Hungary reportedly being created by former Italian professional Sandro Lerici with backing from Hungarian electric bike expert Stefano Varjas's brand of bikes.

“Above all, we want to look back positively and take the good memories with us," said Zijlaard looking back at the activity of the Roompot team.

"In addition, it’s not inappropriate to mention that we’ve always had a squeaky clean record with the team. There have never been any significant problems, we’ve always acted correctly and met our financial obligations towards the UCI and other stakeholders.

"We’ve represented the numerous partners who expressed their faith in our project as well as possible. It was the best way to thank them for their trust.”