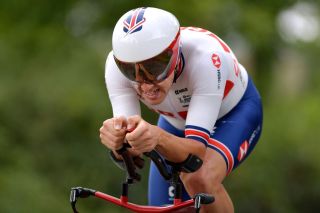 Alex Dowsett put in one of his best time trial performances in recent years to take fifth at the UCI Road World Championships in Yorkshire. The result guaranteed Great Britain two spots for next year’s Olympic time trial in Tokyo, with Dowsett understandably interested in making the selection.

However, the time trial specialist was cautious over his chances, given that IOC rules dictate that time trial spots at the Olympic Games can only be handed to riders who have also been selected for the road race.

“It does throw the Olympics as a possibility but the Olympics have a ridiculous rule where you have to be part of the road race team as well, and we have some quite strong road racers in the UK,” Dowsett said after his ride in Yorkshire.

“It makes life more difficult for sure. I think it's a ridiculous rule, it's like saying to Usain Bolt, 'If you want to do the 100m you have to do the 800m and the 1500m as well, mate.' It's a different sport. Not one of those boys in the top 10 [at Wednesday's time trial – Ed.] are going to be favourites for the road race next year."

Dowsett finished the 54km course in a time of 1:07:07, with Rohan Dennis (Australia) taking the rainbow jersey, and Remco Evenepoel (Belgium) and Filippo Ganna (Italy) occupying the remaining steps on the podium. Dowsett may have finished two minutes off the winning time, but it was still an admirable performance and one that saw him put time into a host of other world-class talents. The ride will certainly provide food for thought at British Cycling when it comes to Olympic selection.

“I'll have to sit down and see really, sit down with British Cycling and work out what we can do. It's a two-minute gap to Rohan and a minute to Remco, and he's probably not going to get any slower, but I've moved forward,” Dowsett added.

Dowsett’s form has been on the up since the start of the summer. He was a valuable leader in Katusha’s surprisingly strong ride in the team time trial at the Tour de France, and he has built on those solid foundations in the months since. When asked where his fifth place in Yorkshire ranked in terms of his career, the Essex rider said it was "really good".

“That's up there for sure. Looking at where I am in the results that are there with the Giro stage win, the hour record - just with how comfortable that hour record was - it will definitely feature in my top five because I am top five," he said.

“For a TT I don't like putting a target on where I want to finish because I want to win. Everyone on the start line should want to win, but looking at what is realistic, I'd have said a top 10 would be a good day so I'm happy with that. It's just nice for it all to come together.”

Archibald shines in place of Thomas

Dowsett wasn’t the only British rider on show during Wednesday's time trial, with John Archibald more than holding his own against elite competition. The 28-year-old was a late call-up after Geraint Thomas decided to forgo his position on the team. Archibald set the best time earlier in the race before being bumped down to a still-respectable 14th place.

“I felt good as far as executing a ride and a plan, and the sensations through the ride. I put in as good a ride as I could do, looking at the splits I'm not going to fare too highly, but I'm not looking back at that ride and thinking there were bits I would have changed dramatically so I'm pretty pleased,” he said.