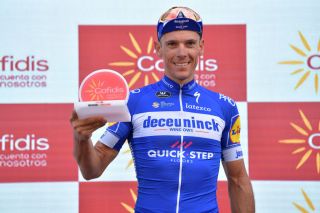 On a dramatic stage 17 at the Vuelta a España, Philippe Gilbert took a faultlessly-calculated second stage win after his Deceuninck-QuickStep team dominated a 40-rider breakaway for over 200 kilometres.

"It was a historical stage, I've never done one like that before," Gilbert said afterwards. "We did a team time trial of 220 kilometres with seven of our eight riders ahead."

Already the winner in Bilbao on a hilly finale, Gilbert timed his move perfectly up the gradual final climb into Guadalajara. It was his seventh Vuelta a España stage win and 11th in a Grand Tour.

"We had a textbook finish," explained teammate Tim Declercq, instrumental in keeping the breakaway.

"When we came to the final, we knew Sam [Bennett] was the man to beat. And from the moment it started to rise, I gave it a good pull to make it as hard as possible.

"[Zdenek] Stybar made a great move, and I thought for a moment that he was going to get it. It made Sam make his move too early and after that Phil [Gilbert] had only one man to follow."

Gilbert has never taken three stages in a Grand Tour, but with his original target stage of Toledo on Friday yet to come, it still remains possible.

"When I came here I said there weren't many chances, but now I've got two, a third one could well be possible," Gilbert said.

"The most important thing, though, is that this confirms again I've got the form and the strength for the World Championships."

Gilbert predicted that amongst the fall-out from such a dramatic stage that had an average speed of over 50kph was that everybody's legs are going to hurt.

"It wouldn't surprise me if there are lots of chats tonight amongst the teams and a lot of desire for revenge on tomorrow's big mountain stage," Gilbert said.

Apart from his success, Deceuninck-QuickStep's third stage win in the Vuelta this year, the cherry on the cake for the Belgian team was James Knox moving up into eighth overall. Rooming with Gilbert in the Vuelta, Knox is "learning fast," the Belgian says.

"He's looking to see what his limits are still, but he's got a great future in stage racing. He's yet another Englishman likely to be in the thick of the action in those kinds of races," Gilbert said.

"He's eighth, I'm sure he'll hang on if he can to that, but whatever happens he's done a great Vuelta so far."

Should Knox switch paths and go for the Classics, too, a specialist like Declercq says to judge from how he raced in the 'echelon-break' on Wednesday, the Englishman is shaping up nicely in that area too.

"James did an amazing job; he was one of the ones that pulled the most in the beginning and sometimes I had to say, 'easy James, it's still 200 k's to go! He's really growing in this Vuelta and today was an amazing performance by him."

As for Gilbert, he was asked why he did not remain with Deceuninck-QuickStep for 2020 if he was looking so settled and producing so many top results.

"That's simple, I got no offer from the team, so I couldn't stay, I had to go elsewhere," Gilbert says. "Fortunately I could go somewhere else, I'm feeling very motivated with my new project with Soudal-Lotto."

But for now, in any case, Gilbert is still racking up some hugely impressive wins with Deceuninck-QuickStep. And Wednesday's in the Vuelta a España was arguably one of the most memorable of them all.