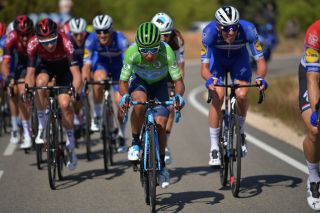 Nairo Quintana (Movistar) returned to the battle for the general classification at the Vuelta a España with a vengeance on a day of high drama in which a 40-rider breakaway punched a vast hole in the overall classification.

Having made it into the front group when it formed in the opening kilometres and survived on the windblasted stage 17 - the longest of the Vuelta - Quintana grabbed a total of 5:19 on his rivals, moving up to second overall.

The 2016 Vuelta winner is now 2:24 down on race leader Primož Roglič (Jumbo-Visma), having made a huge gain on a day without a single classified climb – and on the eve of a tough mountain stage in Madrid.

Quintana had been on the back foot throughout the second week, having caught a cold while waiting for the ski-lift after stage 9 in Andorra, but he has suddenly re-emerged as Roglič's most dangerous rival.

Surrounded by a huge sea of microphones and television cameras the minute he crossed the line in Guadalajara, Quintana said: "The idea was to weaken the leader and to get ahead. We're in the fight for el maillot rojo now.

"It's true, I've been in a bad way health-wise, I suffered a lot, but I'm still there. When your legs get tired, you pedal with your heart."

Quintana emphasised that, for an out-and-out climber like himself, to be in a day-long break like Wednesday's was an exceptional achievement. "I always said I'd give it everything until the end."

"Have we turned the race upside down on a day like this?" Valverde said, repeating a journalist's question. "It was a good day for it. We've got Nairo right in the middle of the GC battle. Tactically, this has been great."

Movistar had three riders up front - José Joaquín Rojas, Imanol Erviti and Nelson Oliveira - along with Quintana, enabling them to ally with Deceuninck-Quick Step and Team Sunweb, the former fighting for the stage win and for GC man James Knox, the latter for Wilco Kelderman, who moved up to sixth overall.

"Jumbo-Visma tried to close the gap, but they couldn't," Valverde said. "That gave us a greater advantage. At one point [with around 50km to go – ed.] we even accelerated behind to blow their riders off our wheels, but Astana were very strong. If it hadn't been for Astana, Roglič would have lost the overall lead."

Valverde argued, too, that the GC battle will now be much more open after such a brutally difficult stage. The damage will be felt in the coming stages, "particularly for those who were working hard," he observed, "and that's something I didn't have to do - I could follow the other guys' wheels."

For Movistar, though, the biggest beneficiary though, without a doubt, was Quintana, who is once again back in the battle for red – and with two tough mountain stages to come.