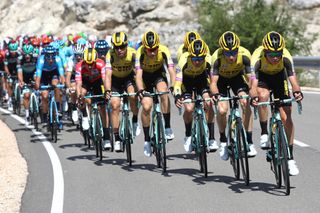 Vuelta a España leader Primož Roglič (Jumbo-Visma) rued a mistake in the early part of stage 17, which, as a team director later admitted, developed into a situation that could have cost him the race.

Roglič admitted that he was not close enough to the front in the opening kilometres, when a big break of more than 40 riders went clear amid strong winds.

"The team saved me with a big effort," Roglič said at the finish in Guadalajara.

"I made a mistake, I shouldn't have been where I was, I should have been at the front. They just went full gas from the very beginning and that was it for the rest of the day."

Roglič was part of a second group that had to chase for over 200 kilometres. With 40km to go, his teammates, having worked as hard as possible, were all dropped, leaving him isolated.

However, Roglič recognised that, whilst the team had suffered a defeat, saying "we lost a battle, but not the war."

Futhermore, he inisted he never thought during the stage that the Vuelta was over, although Niermann told Cyclingnews that, from his point of view, it was an extremely narrow escape.

As Roglic pointed out, in the second group he was able to form working alliances with riders from other teams who had GC riders under threat from Nairo Quintana (Movistar) up the road - mostly Miguel Ángel López's Astana and Tadej Pogacar's UAE Team Emirates, but also Rafal Majka's Bora-Hansgrohe.

Overall, Roglič and the rest lost more than five minutes to Quintana, who is now second overall at 2:24, but it could have a been a lot worse

"I stayed calm, I knew that it was not only me, but also other guys that wanted to finish as high [on GC] as possible," Roglič argued.

"We will see if I have saved the Vuelta in Madrid. It's looking really good for us. This Vuelta is really unpredictable, and for sure we can expect a big fight in the days to come."

Standing at the team bus as he waited for the riders to come in, Niermann described the ultra-fraught stage as “one to forget" when speaking to Cyclingnews.

"I would say we are lucky. We still have the jersey, and by a good margin, but it didn’t go the way we planned."

Asked if there were points when he thought the race was over, Niermann answered: "Yes, of course.

"We knew we had to pull straight away, we went with all our riders, and when you have the full Deceuninck-QuickStep team, a lot of the  Sunweb team, and the four guys from Movistar all ahead, then it’s going to be hard if you have to do it alone. Luckily later on we got some help."

Asked why Jumbo-Visma had not been able to control the situation early on when the stage exploded in the early kilometres, Niermann pulled no punches. "It happened after three kilometres," he said. "We knew there were crosswinds but we were not that sharp that we had the whole team there in the front 50 positions."

Niermann indirectly confirmed Roglic’s error by explaining that "the peloton attacked, a group of 50 guys went away, we were also in there but Primoz was not.

“Of course we made them [Roglic’s teammates] wait immediately. Straight away we had to try to close it but they [the front group] were going so hard, we couldn’t.

"We were really lucky today. Of course, the team did all it could but when you have to control a group of 47 riders with six riders, it’s always going to be really hard, particularly if they are really committed.

"There were a lot of teams with no interest in GC but who wanted the stage and they were really pulling. That’s cycling. But we weren’t sharp enough at the start and we made it a really hard day for ourselves."