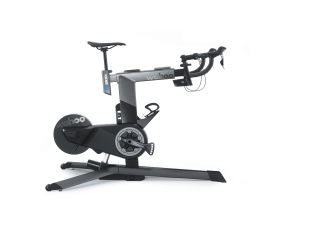 Wahoo is finally taking orders from UK customers, for its Kickr smart bike, the company's most comprehensive indoor setup, which is featured in our guide to the best smart bikes.

One of the brands spearheading the revolution in digital cycling data management and indoor training convenience has been Wahoo. With its Kickr bike, Wahoo has produced what its engineers and industrial designers believe to be the best possible indoor trainer. It weighs a substantial 42kg, but that mass creates a very sturdy base for riders who wish to ride at shorts bursts of peak power.

The Kickr Bike's technical specification features a sophisticated 2200-watt electromagnetic motor which provides you with a natural cadence and resistance curve. A second motor changes the Kickr’s posture, enabling inclines of up to 20-per cent and down to 15-per cent, if you like mimicking the steepest of Alpine Grand Tour climbs in your living room.

As one would expect from a brand so deeply immersed in managing fitness data, Wahoo’s Kickr has incredible digital convergence. This indoor trainer is both Bluetooth and ANT+ compatible, so it will sync to most devices you wish to use, including the virtual world of Zwift or competitive realm of Strava.

Wahoo’s Kickr Bike might be strong on its digital features but the bike’s mechanical customisation is equally impressive. There are adjustments for bike length, seat- and handlebar height. By Wahoo’s estimation, anyone between 1.52m and 1.95m in height should be capable of finding their ideal ride position on the Kickr.

No matter which drivetrain is on your road bike, the Wahoo Kickr can replicate that shift feel and pattern. Seven custom gear shift configurations can be replicated with the Kickr Bike, matching the feel of Shimano, SRAM and Campagnolo.

Priced at £2,999.99, the Wahoo Kickr Bike is for those looking for a premium, dedicated indoor setup, and is available to pre-order now with delivery expected in one to two weeks.