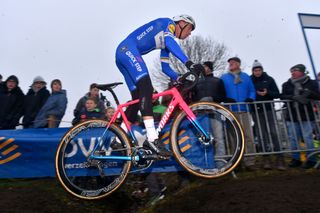 The Superprestige cyclo-cross series continues this Sunday with round 5 in Zonhoven, Belgium, where Toon Aerts (Telenet Baloise Lions) will look to defend his lead in the elite men's standings, and Ceylin del Carmen Alvarado (Corendon-Circus) will do the same in the elite women's competition.

The day before, a number of cyclo-cross's big names will also line up at the Ethias Cross in Essen, Belgium, although the likes of Aerts and rival Eli Iserbyt (Pauwels Sauzen-Bingoal) will be resting up ahead of Sunday's Superprestige race, while the dominant Mathieu van der Poel will miss the entire weekend of 'cross in favour of a Corendon-Circus team training camp in Benicassim, Spain.

Stybar is again set to be in action in the Superprestige on Sunday, when Aerts will face stiff challenges from Pauwels Sauzen-Bingoal trio Iserbyt, Michael Vanthourenhout and Laurens Sweeck, with the latter starting the race on the same points score as Aerts – 45 – while Aerts' Telenet Baloise Lions teammates Corne van Kessel and Quentin Hermans are both just two points off the pace in equal third place overall.

It's similarly close at the top in the elite women's overall standings, where under-23 European champion Alvarado leads elite European champion Yara Kastelijn (777) by just three points, while world champion Sanne Cant (IKO-Crelan) is a little further off the pace, seven points down in third.

Everything could change in the men's and women's classifications in Zonhoven on Sunday, however, and with no Van der Poel in the men's race, it should make for some very close racing.