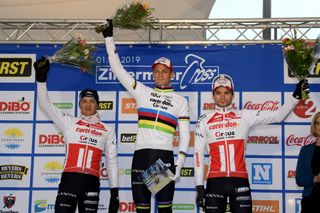 It was another 100 per cent successful weekend of cyclo-cross racing in Belgium for Mathieu van der Poel, who easily won Saturday's third round of the DVV Trofee – the Urban Cross in Kortrijk – before leading a Corendon-Circus podium clean-sweep at the Zilvermeercross in Mol on Sunday.

Van der Poel's dominance since his return to 'cross this winter – following a highly successful 2019 road season, in which his wins included Amstel Gold, Dwars door Vlaanderen and three stages and the overall title at the Tour of Britain – continued apace at what was a new round of the DVV Trofee in Kortrijk on Saturday.

He appeared at first to toy with his rivals, perhaps lulling them into a false sense of security that he might be beatable. But when he attacked, he left them all for dead, taking victory by almost 30 seconds over Tim Merlier (Creafin-Fristads), who led home Telenet Baloise Lions' Toon Aerts and Corne van Kessel, and Pauwels Sauzen-Bingoal pair Eli Iserbyt and Michael Vanthourenhout.

Both riders later played the incident down, but Iserbyt continues to lead the series overall by 2:10 from Vanthourenhou - unusually, the competition's overall standings are calculated on time, rather than points.

Brand took the victory in the women's race, outsprinting Ceylin del Carmen Alvarado (Corendon-Circus), with 777's Annemarie Worst another 16 seconds back in third. In the overall standings, Worst continues to trail her teammate Yara Kastelijn by just four seconds.

More of the same at Zilvermeercross

The Zilvermeercross is a slightly lesser event, which isn't part of either the World Cup, the Superprestige series or the DVV Trofee. While many of the top names chose to rest after Saturday's efforts, with a busy December programme in the discipline to come, no one seemed to have told Mathieu van der Poel that he should have been taking a break.

The 24-year-old delighted in racing with his Corendon-Circus teammates Tom Meeusen and David van der Poel – his brother – and a face-plant in a sand section barely slowed the world champion down. He finished ahead of Meeusen and David, and will now look ahead to round 5 of the Superprestige in Zonhoven, Belgium, next weekend.