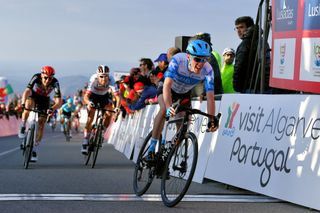 Dan Martin is quickly adjusting to life at Israel Start-Up Nation, taking third place at the Volta ao Algarve's summit finish on the Alto da Fóia on Thursday. The Irishman now lies fourth overall after two days of racing, the same placing he took at the Volta a la Comunitat Valenciana at the start of the month.

Martin has previous experience with the climb, winning on the Alto da Fóia ahead of eventual race winner Primož Roglič three years ago and finishing fourth on the same stage in 2018. Despite this and his clearly good form to start the season, he wasn't sure about an GC push this week, with Coronavirus quarantines in Asia partly to blame.

"The overall will be tricky because the whole Coronavirus thing has messed up our time trial bike delivery," Martin told Cyclingnews. "So, because of that, I haven't really had the chance to get on the TT bike yet. GC is going to be tricky.

"Obviously, I'll give everything I can, but I'm just here to try and get stages and why not have a crack at that on Saturday as well?"

Though nobody could match Deceuninck-QuickStep phenomenon Remco Evenepoel's acceleration 400 metres from the line on the Fóia, Martin was among the closest challengers. The 33-year-old was on the wheel of the first chaser, Rui Costa (UAE Team Emirates) at the time, then jumping past the home favourite to follow Max Schachmann (Bora-Hansgrohe) in the dash to the line.

Now lying two seconds in arrears to Evenepoel, Martin has the possibility of taking the race lead should he win on Saturday's fourth stage to the Alto do Malhão. Overall victory, though, looks beyond reach given Evenepoel's time trial strength.

Still, for Martin, the race is part of a build-up to bigger goals, so a positive performance is a sign of good progress.

"Mainly it's just to continue building," he said of the race. "That's what these races are for – working out the bugs in ourselves, tactically and physically.

"Then I've got a bit of a break after this. At these races – Valencia and here – it's all about seeing what I need to work on going forward towards Catalunya and [Itzulia Basque Country]."

Martin is joined in Portugal by six Israel-StartUp Nation teammates, four of whom (Reto Hollenstein, Jenthe Biermans, Nils Politt and Mads Würtz Schmidt) are fellow newcomers to the team, though all rode for Katusha last year.

Despite the large task of integrating so many new riders – half a squad's worth – as well as new staff and equipment, it's been a smooth process, said Martin.

"It's been really good. We're all really surprised at how well we've gelled. It's really come together very quickly, we're racing well together, we're working well together, and we've got a lot of trust in each other already.

"There are always some things that go wrong when you're learning to work together you know? I've made a few personal mistakes in Valencia that perhaps cost me better results ­– just gear selections, just silly stuff you know? But the basic stuff has been excellent."