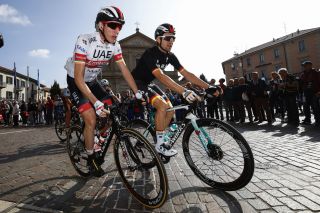 Dan Martin has welcomed the news that the 2020 Tour de France will follow an innovative and perhaps more unpredictable route, but warned that the rumoured mountain time trial to La Planche des Belle Filles on the final Saturday could be counter-productive if race organisers ASO are hoping for an open race that suits the likes of Julian Alaphilippe (Deceuninck-QuickStep) and Thibaut Pinot (Groupama-FDJ).

"They're trying to make the Tour de France different, which I think is a good thing," Martin told Cyclingnews before the start of the Tre Valli Varesine race in Italy as he prepares to end his season and time at UAE Team Emirates at Il Lombardia on Saturday.

"Next year's race will be different right from the start in Nice because there'll be a lot more climbing from very early on. A time trial up La Planche des Belle Filles could be cool. I don't think it'd be extreme; I think it'd make the race different."

Martin is known for his aggressive racing, and so could benefit if the 2020 Tour de France leans towards the climbing and attacking talents of the current generation of French riders. Alaphilippe spent 14 days in the yellow jersey until Egan Bernal (Team Ineos) finally cracked him in the Alps, while Pinot seemed poised to fight for overall victory until a muscle strain forced him to retire in tears.

Alaphilippe won the rolling time trial around Pau, but Team Ineos have traditionally set up their Tour de France with significant time gains in the time trials. Organisers ASO seem keen to limit the time trial kilometres if it can hamper Team Ineos and keep the racing open and entertaining. More gravel roads are expected in the 2020 Tour de France, with an early visit to the Pyrenees, a trip through the difficult Massif Central and then a third week in the Alps and Vosges, possibly with that final mountain time trial on the steep slopes of La Planche des Belle Filles.

Martin is aware that different doesn't always mean better, however.

"Having a late mountain time trial could actually be counter productive because maybe some guys will wait for it. That's what we've seen in the past," Martin warned.

"I think this year it worked quite well because the time trial in Pau was quite early in the race and so it made the racing aggressive. When we had the time trial very late on, like in Marseille in 2017, it didn't create the same time gaps, so everyone is then still so close overall, the racing is more controlled, and people are scared about risking it all."

The Irishman will move to the Israel Cycling Academy in 2020, with the Professional Continental team taking over the Katusha-Alpecin slot in the WorldTour. Martin is expecting to target the Ardennes Classics and shorter stage races, but could lead the team at the Tour de France.

"When I signed with the Israel Cycling Academy, we weren't in the Tour de France and I'd already starting thinking of an alternative programme. Things change quickly in cycling, so we'll see during the winter when we sit down and decide our ambitions," he explained.

"I knew that stepping down to Pro Continental level was going to change things and give me the rejuvenation that I need – the change that I need. Whichever races I'll do, I'm going to race hard as always and see where it takes me. It's done me well so far in my career."