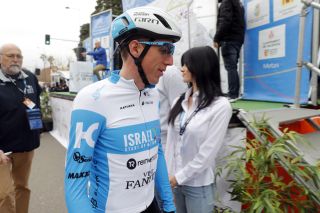 No matter which way you look at it, spending well over a decade doing the same job, even one as pleasant as being paid to ride a bike, could begin to create a sense of routine and tedium. But as Dan Martin (Israel Start-Up Nation) kicked off his 13th season on Wednesday in the Volta a la Comunitat Valenciana, the Irishman insisted that, rather than growing weary with it all as the years roll by, he's starting 2020 feeling "refreshed."

"Morale is good," the Irishman told Cyclingnews shortly before he got down to the serious business of racing on stage 1 of the race. "From the first training camp, there's been a very good vibe on the team, a super-relaxed, nice atmosphere and that's continued right the way to here."

"Obviously I've been through a few different environments, different teams in my time" - Israel Start-Up Nation is his fourth team - "and hopefully this is the right one to get the most out of myself this year."

One big change since 2019 has been a full reworking to Martin's usual off-season training program, something born out of Martin's incipient collaboration with Israel Start-Up Nation's performance manager Paolo Saldanha. While Martin sums up the new overall strategy in less than 15 words - "a lot more riding on feeling, a lot less looking at my power meter" - the actual day-to-day training program he's adopted is "completely different to what I've done before.

"It's a lot more intensity work, and hopefully that'll pay off, but the important thing is I've enjoyed it. So it's refreshing, I feel rejuvenated. I haven't overthought it, and maybe that's the key."

In keeping with that philosophy, rather than having a stated goal, Martin goes into Valencia with no specific objectives, other than "seeing where I am at, and what work needs to be done. I do Algarve and then I have a bit of a break until Catalunya. This is a prelude to the 'real stuff'", which will also include the Vuelta al Pais Vasco, the Ardennes and the Tour.

That race program is very familiar, but what also reinforces Martin's current sense of breaking into unknown terrain in 2020 is that he is working with a different trainer, a new team and, as he points out, "new equipment, too." He's also riding every day with an almost completely different group of teammates altogether to those he's known before.

"Apart from Rory [Sutherland], whom I've known from two years in UAE and from Girona and stuff, I don't know anybody - I've never been teammates with them. They've been people I'd say hello to in the peloton, but that's it."

But if one thing the new squad all have in common, Martin says, is he and his teammates are not getting excessively stressed - so far, at least - about the upcoming season. Rather, "There's not a whole lot of expectations for us, only the pressure we put on ourselves.

"Obviously the whole deal with Katusha came through pretty late and there's still a few details to be ironed out. But it's been an easy transition, morale's still super high and that's what pulls you through."