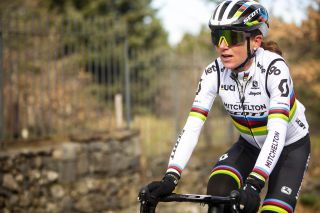 Annemiek van Vleuten (Mitchelton-Scott) reacted to the recently published revised Women's WorldTour calendar saying that she will be ready to race on August 1. The reigning world champion also expressed her pleasant surprise with the new addition of a first-ever Paris-Roubaix and has already begun to consider what bike to use in her Scott line-up.

The UCI announced Tuesday a revised 2020 Women’s WorldTour calendar, a replacement for plans that were halted due to the coronavirus (Covid-19) pandemic. The top-tier series has retained 18 of the 22 events, now set to take place from August 1 to November 8.

The series will consist of 18 events that include five stage races, with a shortened Giro Rosa (September 11-19). There will also be 13 one-day races including La Course (August 29), the three Ardennes Classics - Flèche Wallonne (September 30), Liège-Bastogne-Liège (October 4) and Amstel Gold Race (October 10) - along with Tour of Flanders (October 18), and the new Paris-Roubaix (October 25).

Van Vleuten said she is happy with the published calendar because it gives the riders a plan with which to form future goals, however, she stressed that the development of the coronavirus pandemic was the most important factor in determining if the events would come to fruition.

"I’m happy to see all of the races there, all of the beautiful races I was hoping for. Especially Strade Bianche, Tour of Flanders, Liege-Bastogne-Liege and Fleche Wallonne, the Giro Rosa and Boels Ladies Tour which is in my home country. I’m super excited that they are all on the list," Van Vleuten said.

"I can’t wait to race any race, it doesn’t actually matter what kind of race it is at the moment.

"The most important thing is health first, but this is nice if the situation is possible with global health. There are some doubts and we are not super sure if it will all be organised in the end, but it’s good to have some goals and we can make a plan again to at least be fit at the 1st of August because I’m super excited to race Strade Bianche."

Van Vleuten is already starting to consider what races she will target in the post-COVID-19 calendar. In a recent UCI Live Chat held on Facebook, Van Vleuten discussed her favourite races and even a potential bike choice for Paris-Roubaix.

"I just heard yesterday that we will be racing Paris-Roubaix," Van Vleuten said. "I know that Scott has a special bike for Paris-Roubaix, so that could be an option. Usually, I really like the bike I'm riding and don't like to change the bike so much. I was always riding the Foil and now I'm using the Addict, and I love it so much that I think that bike also suits very well on the cobbles. Then maybe I can try ... I haven't ridden the cobble sectors yet from Paris-Roubaix, so maybe after I will say I want to ride the special bike."

Van Vleuten, a two-time Giro Rosa winner, was pleased to see the Italian stage race on the revised calendar. The race is scheduled to take place from September 11-19, and end just one day before the start of the 2020 UCI Road World Championships. She did not confirm her participation in the Giro Rosa, but noted that she will work with her coach and team on a suitable racing programme.

"I was super happy to see the Giro Rosa on the calendar. I think it's a little bit interesting how to make a combination of it with the World Championships, though, because they are very close together and a little bit tricky, maybe," she said.

"I have to make a plan with my coach, but I am super happy to see it on the calendar, and I will see how we can do that. I really look forward to it because, for me, it is a special stage race."

Van Vleuten confirmed that her main target for next season will be the postponed Olympic Games in Tokyo. She said she will also have a strong Spring Classics programme.

"Yes, [The Olympic Games] is only something that you can do once in four years. Sometimes, I am a little bit sad that people only focus on the Olympic year and reduce the whole year," she said.

"There are so many goals to focus on and I think I will approach it the same as in 2020 with a focus on the spring. I really love Flanders and Strade Bianche and the Ardennes, and then after I will focus on preparation for the Olympics.