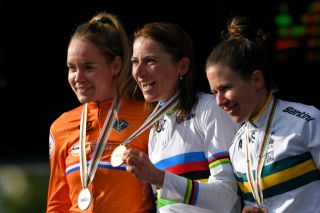 Annemiek van Vleuten (Mitchelton-Scott) has reacted to Amaury Sport Organisation's (ASO) decision to bring the 2020 La Course by Le Tour de France back to its roots as a circuit race in Paris, calling it a "step backwards".

The newly crowned road world champion told the Dutch broadcaster NOS that the organisers have reduced its women's race to "nothing more than a criterium".

Christian Prudhomme, director of the Tour de France, announced details of the Women's WorldTour event at the Palais des Congrès in Paris on Tuesday. He confirmed that for next year's seventh edition the women will complete 13 laps of the Champs-Élysées circuit for a total of 90km of racing.

"Have I heard La Course is in Paris?" Van Vleuten said in a interview with NOS. "To my disappointment, yes. This is a step back. It is now nothing more than a criterium. While it is still known as a WorldTour competition, but for the men, criteriums are not included in the WorldTour."

La Course is currently scheduled on the UCI's 2020 Women's WorldTour calendar for July 10. Cyclingnews understands that the La Course date could change to July 19 so that it is held in conjunction with stage 21 of the Tour de France, but that has yet to be confirmed.

If the date does change, the race will be held just one week ahead of the Olympic Games women's road race on July 26. Those participating in Tokyo will likely not race La Course.

La Course by Le Tour de France was established by ASO in 2014 as a circuit race on the Champs-Élysées on the final day of the Tour de France. The sprinter-friendly format saw victories for Marianne Vos, Anna van der Breggen and Chloe Hosking in the first three editions.

Van Vleuten won the next two editions; the two-day event held at the Col d'Izoard and Marseille in 2017, and the one-day event at Le Grand-Bornand in 2018. Vos won this year's race circuit race in Pau.

Since its inception six years ago, however, some have expressed disappointment that ASO has not expanded La Course into a bigger stage race. ASO confirmed last year that it would not host a women's stage race during the men's Tour de France saying that it would be "logistically impossible".

ASO stated last year that it is considering hosting a women's stage race at a different time of the season.

Van Vleuten told NOS that she is not asking for a women's Tour de France of 21 stages, rather, she is expects ASO to host a women's event that is more challenging than a flat circuit race.

"I don't need a multi-day La Course, but a tough stage would be nice," she said. "There are so few WorldTour races in which we go into the mountains. At this La Course I get the idea that they were like 'oh yes, we have to organise La Course as well, let's do it in Paris'."