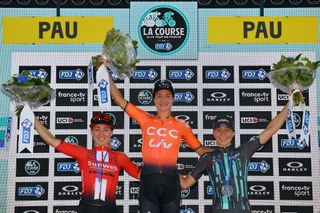 La Course by Le Tour de France will return to the Champs-Élysées in Paris in 2020, organisers Amaury Sport Organisation (ASO) announced on Tuesday.

The seventh edition of the Women’s WorldTour event is currently scheduled for July 10 and, if that date remains, the race will not be held in conjunction with the final stage of the men's Tour de France scheduled in Paris on July 19.

Cyclingnews understands that the La Course date could change to July 19, however, that has yet to be confirmed.

"The seventh edition of La Course by Le Tour de France powered by FDJ will take the world's elite back to the Champs-Élysées, where it all began with Marianne Vos sprinting to the win in 2014," ASO wrote in a press release.

"Starting in 2016, the race moved on to pastures new to give other types of riders their day in the sun; Annemiek van Vleuten triumphed in the race against the clock and in the mountains, followed by a circuit for punchers in Pau last July that was dominated by none other than unflappable Marianne Vos."

ASO confirmed that, in next year's seventh edition of the event, the women will complete 13 laps of the Champs-Élysées circuit for a total of 90km of racing.

La Course by Le Tour de France was established by ASO in 2014 as a circuit race on the Champs-Élysées on the final day of the Tour de France. The sprinter-friendly format saw victories for Vos, Anna van der Breggen and Chloe Hosking in the first three editions.

Organisers shifted to a two-day experiment in 2017, which saw a summit finish on the Col d'Izoard, held on the same day as stage 18 of the men's race, followed by a handicapped time trial in Marseille. Van Vleuten won both stages and the overall title.

The race then shifted back to just one day in 2018, as a mountainous road race that linked Annecy and Le Grand-Bornand. Van Vleuten won that edition as well, which was held in conjunction with stage 10 of the Tour de France.

This year’s race remained a one-day event held on circuits in Pau. It used the same 27km circuit that the men used for their stage 13 time trial later the same day at the Tour de France. Vos stormed to victory to secure her second title at La Course.

Some members of the cycling community have expressed disappointment that the ASO has not expanded La Course into a bigger stage race, similar to the Tour de France.

ASO also stated that, in addition to considerations to launch a women’s stage race, it is setting up a special working group intended to help the development of women's cycling.