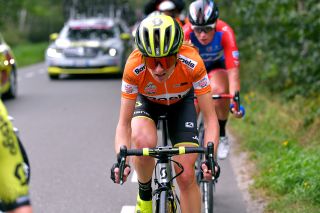 Annemiek van Vleuten (Mitchelton-Scott) kept her overall lead at the Boels Ladies Tour despite a mid-race crash on stage 1. Although she was fortunate to have remounted her bike unscathed from the accident, she said the race, did not go well for her.

"Today riding around with no ingredients to race in this stage and just try to get around all those crashes: not my favorite thing," Van Vleuten wrote in a post on social media.

"Got involved in crash in front of me, could not avoid it unfortunately. Sore wrist and hope we will not get 4 more similar stages like this."

There were several crashes on a flat and hectic 123km stage between Stramproy and Weert. Van Vleuten, who won the prologue the previous day and wore the overall leader's jersey, was involved in one of them, going down 46km from the finish.

She tore her bib shorts in the crash and lightly injured her wrist but got back on her bike and rejoined the peloton after chasing back for six kilometres. From then on, she just wanted the race to be over.

"Some riders crashed in front of me and I just went over the top of them," Van Vleuten said. "It was a big pile-up, and I couldn't avoid it. I have a sore wrist, so I decided to stay at the back of the peloton. Gracie (Elvin) was really good in helping me in the last four or five kilometres to get me to the finish safely."

Other riders were less lucky and had to abandon. Van Vleuten's teammate Sarah Roy was the first after crashing only 20km into the stage. With an injured knee and a banged head, she was unable to continue in the race, though the team has since announced that Roy's injuries aren't serious.

Claudia Koster (WNT-Rotor) could get back on her bike after crashing, but as she, too, had hit her head and has a suspected concussion. The rider and team agreed to let her stop as a precaution.

Aude Biannic (Movistar Team) fell hard on her right side in the same crash that took out Roy, hurting her gluteus, lower back, and elbow, and abandoned the race. A medical check-up confirmed that Biannic had not sustained any fractures.

Van Vleuten said that the race profile, a totally flat route that nevertheless took in some narrow roads, played its part in the hectic, crash-heavy stage.

"If you have races like this when it's not selective, everyone gets nervous, especially with a bit of wind," Van Vleuten said. "As a team, we can lose more on these kinds of stages, there's not much to win without having a sprinter."