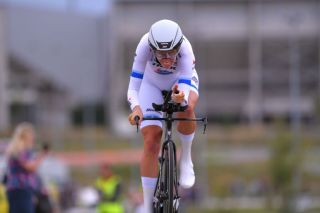 Two months after a crash in the Boels Ladies Tour left her wheelchair-bound with a broken pelvis and arm, Ellen van Dijk is now focussed on rehabilitation to recover in time to race the 2020 season with Trek-Segafredo, including aiming for selection to the Dutch team for the Summer Olympic Games in Tokyo.

The 32-year-old has 57 wins to her name and 16 in the team time trial, with one World Championship, four European Championship and four National Championship titles in the individual time trial and the 2014 Tour of Flanders on her palmares.

Her European champion's jersey was only a month old when she crashed heavily in stage 4 of the Boels Ladies Tour in September and she was on target for the World Championships in Yorkshire.

"I was really focused on Worlds and was working towards this goal for several months. It took some time to fully realize I wasn't going to compete. The day of the Time Trial, I didn't watch the race; it was just too painful. We went to the cinema instead," Van Dijk said in an interview posted on the Trek-Segafredo team page.

"It's a big shock to the body and mind to go from 100 per cent fit to not being able to move at all. The first week I spent mostly in the hospital, and I was just so tired from pain [medication] that I didn't mind so much that I couldn't move. In the second week, I was home and got frustrated more and more.

"I got some of my energy back, but I couldn't do anything other than lying in bed or sitting in a chair. Luckily a lot of friends and family came by and entertained me. It actually was a very nice time from a social perspective."

"After about a month, I went to the gym to start basic exercises to strengthen my arm and leg. It's incredible to see how much muscle you lose when you're in bed for a while. Last week was my first ride back on the bike, but I still need to make my right leg a lot stronger. So, at the moment I can do short rides and a lot of strengthening exercises."

Even so, the recovery is taking longer than Van Dijk had hoped.

"Now that I finally can ride, I thought I could really start training again. But everything takes so much time. For now, I can only ride 1.5 hours, and I can't ride every day yet. I thought I would be completely fine by now, but every time my body tells me I need to slow down. Doctors keep telling me my recovery is going very fast. But for me, it can never go fast enough."

Van Dijk still has big goals for the 2020 season.

"At the moment, my full focus is on my recovery: Getting back to 100% and being able to fully train and race. Hopefully, this will keep going to plan, and then I will target the spring classics, a selection for the Tokyo Olympics, and the European and World Championships at the end of the season."