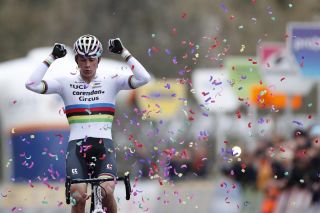 Mathieu van der Poel will end his cyclo-cross season early, with the World Championships in Dübendorf, Switzerland on February 2 set to be his final race of his 2019-20 campaign.

The Dutchman had already missed a large portion of the early cyclo-cross season after an extended, successful campaign on the road for Corendon-Circus. He missed the opening three rounds of the Telenet Superprestige and UCI World Cup, as well as the DVV Trofee opener, Koppenbergcross.

"It is indeed a bit tricky, but choices have to be made," said Van der Poel, according to Wielerflits. "I have put that out of my mind in the meantime. That has to be the case."

Van der Poel: 'I wanted to win for grandpa'

Repeating that feat this year, given the races already missed, looks near impossible; so far he has five race days under his belt, compared with 13 at this point in 2018-19. It's a factor that influenced his decision to skip the same races at the end of this season.

"Can a good classification possibly change my mind? No. I have decided to finish after the World Championships, after which I'll take a week on holiday and then leave for a training camp with the rest of the team."

Van der Poel has already said that he is focussed on the Worlds this year, to the extent that re-taking the rainbow jersey is his "only goal", as he told Het Nieuwsblad at the start of November.

The 24-year-old has won all five races he's started this season, the latest of which came, emotionally, at the weekend at the fourth round of the UCI World Cup in Tábor and the second round of the DVV Trofee in Hamme, just days after the death of his grandfather, Raymond Poulidor.

In Tábor, like at the UEC European Championships, young challenger Eli Iserbyt ran him close, while in Hamme he recorded a resounding 40-second victory over Laurens Sweeck. He then travelled to France to attend his grandfather's funeral.

"I didn't really hesitate," he told Wielerflits of his decision to participate in both races so soon after Poulidor's death.

"Of course, it hasn't been easy, but I think it would have been even more difficult without a race. For me, this was the best way to stay busy.

"I had a hard time all week. That's logical, I think. But when, after an hour of cycling on the limit, you immediately get a deliberate question [about Poulidor], you realise that 'papy' will never stand at the side of the road again."

He's then expected to race a full December calendar, forgoing his usual Spain training camp, which he will instead take in mid-January – missing the World Cup round in Nommay – ahead of his season-ender at the Worlds.