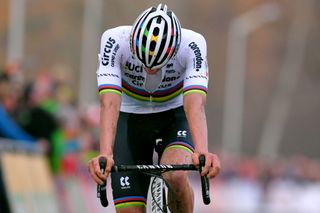 Mathieu van der Poel faced an uphill battle at the UCI Cyclo-cross World Cup in Tabor on Saturday, coping with still-fresh grief following the death of his grandfather Raymond Poulidor this week as well as a third-row start thanks to the UCI rankings. But the world champion overcame his sorrow and a slower than normal start to the hour-long race, fighting his way to the lead group and then out-pacing Belgian Eli Iserbyt on the last lap to take the victory.

"It was a heavy and emotional week for us, this victory is therefore very special," Van der Poel said in tears according to De Telegraaf. "It was both mentally and physically very difficult for me. I wanted to win here tremendously for my grandfather, but also because Tabor is special for me."

Poulidor - a legend of cycling who stood on the Tour de France podium eight times, died at the age of 83 early Wednesday morning. Mathieu van der Poel's parents are Poulidor's daughter Corinne and famed racer, Adrie van der Poel. The Frenchman was extremely proud of his grandson and said that Mathieu was more talented than either him or his father.

Poulidor was hospitalised in early October with exhaustion and his condition continued to decline. "We knew for a long time that he was getting worse, so we were prepared. But that doesn't make it any less difficult," Van der Poel said.

Van der Poel was racing in his first World Cup of the season after taking a break following a taxing road season. He missed the first three rounds in Iowa, Waterloo and Bern and, despite being World Champion, had to start in the third row with 25 riders to get around. He made it to World Cup leader Eli Iserbyt's group in the second half of the race, fended off numerous attacks from Iserbyt and fellow Dutchman Lars van der Haar before distancing them on the last half lap.

"It was hard to find my rhythm, but I waited until the last lap and I'm glad I've been able to win," Van der Poel said. "The competition didn't give me a gift, they were constantly pressuring me," he said.

I wish I could bunnyhop high enough to say hello. Hope you enjoyed the race from up there, this one was for you ❤️ pic.twitter.com/KuXnuy3vczNovember 16, 2019

Earlier this week, Van der Poel announced his 2020 plans for the road season, with the Amstel Gold Race - the WorldTour race that confirmed him as a force to be reckoned with in the Spring Classics - conspicuously absent from a programme that starts with Strade Bianche and ends after Paris-Roubaix when he will switch focus to preparing for the Olympic Games in the cross country mountain bike event.

Adrie van der Poel confirmed his son will not defend his Amstel Gold title in an interview with Helden.

“Next season, Mathieu will organize his season through the Games differently than this year. After Paris-Roubaix, he will no longer race the classics. So no Amstel Gold Race either," Adrie Van der Poel said.

Mathieu van der Poel's Corendon-Circus director Michel Cornelisse added that he supports a mixed schedule of 'cross and road for Van der Poel in the future. "Cycling should not become a routine for Mathieu," he said

"I am also a thousand per cent sure that Mathieu can develop further with us. I now get text messages from good riders who want to race for Mathieu. The ambition as a team is also to become stronger. Corendon-Circus started as a Continental team, is now a Pro Continental team and who knows, a Worldtour license may follow in the future. "