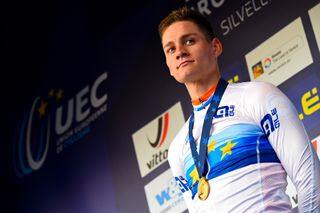 Mathieu van der Poel's new European cyclo-cross champion's jersey may be fresh on his shoulders, but the Corendon-Circus rider is already thinking ahead to the 2020 road season, revealing his provisional early spring schedule after taking two wins in two days on the 'cross bike.

Fewer than 24 hours after becoming European champion for a third time in succession, Van der Poel won his third race of the season at Jaarmarktcross in Belgium on Monday. Afterwards, he revealed he hopes to ride in Italy in March, having already confirmed his attendance at several cobbled Classics, pending his team's invitation.

First-time participations at Strade Bianche, Tirreno-Adriatico and Milan-San Remo are on the menu for Van der Poel, once again assuming that Corendon-Circus are awarded wildcards for the race given their non-WorldTour status.

"That is the intention. We want that very much with the team," Van der Poel said in an interview on Dutch television channel Ziggo Sport.

"We just have to get a wildcard because we're not a WorldTour team. I hope that it can go ahead, and usually we would be eligible for a wildcard."

Van der Poel's latest pronouncement adds to the rapidly fleshing out 2020 calendar for the 24-year-old. With four cobbled classics on his schedule, including the Tour of Flanders and a Paris-Roubaix debut, plus a return to Brabantse Pijl, which he won in 2019, his spring objectives seem complete.

What remains unclear is where his road season will begin, if he'll start in February start as he did in 2019, and whether he will return to defend his Amstel Gold Race title in late April. In any case, after the Classics, he'll switch disciplines once again for the summer.

"In principle, he will rest a while and then ride his first [mountain-bike] World Cup in May," Corendon-Circus team manager Christophe Roodhoft said earlier this month.

That could mean a return to Nové Mesto in the Czech Republic, a round he won in 2019, or earlier rounds at Maribor, Slovenia, and Lošini, Croatia. Van der Poel's major goal on the mountain bike will be the Olympic Games in Tokyo, with the cross-country race falling on July 27.

"Tokyo is my big dream," said Van der Poel to Sporza last week. "After that, a Grand Tour is the big new challenge. I want to go to the Vuelta a España."

The Corendon-Circus team has been trying to strengthening its roster for 2020. Stijn Devolder has retired but Kristian Sbaragli of Israel Cycling Academy is expected to ink a two-year deal, while Sacha Modolo of EF Education First is also likely to join the Dutch Professional Continental team.

Before making his return to road racing next year, though, Van der Poel is focusing his attention on the Cyclo-cross World Championships, which fall on February 2, saying that they are his only real goal for the 2019-20 cyclo-cross season.