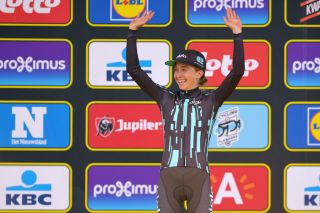 After another year of impressive progression, Cecilie Uttrup Ludwig has set her sights on an even more successful 2020 campaign with her focus on the Spring Classics, Giro d'Italia, and Olympic Games.

The Dane recently announced her move from Bigla to FDJ with the French team hoping to develop the 24-year-old into one of their main leaders for the future. This season Uttrup Ludwig finished third in the Tour of Flanders and backed up that performance with a string of consistent spring rides. She also finished third in La Course before winning the mountains classification at the Women's Tour of Scotland.

"The Spring Classics were obviously the highlight of my season, and Flanders was such a cool race," she told Cyclingnews at the Rouleur Classic earlier this month.

"La Course was another highlight too, with a lot of fans on the roadside, and it was a good race too."

While Uttrup Ludwig is pleased with her continued development as a rider she is firmly focused on winning a major race and breaking the Dutch dominance at the top of women's cycling.

"I'm developing, and slowly, year by year, I'm getting closer. I still need that bit more in order to go for the big win and that would be really nice to get. I hope that next year I'll get even closer and then slowly we'll get closer to those Dutchies because they are really dominant on the women's scene.

"Obviously you're like 'woah' because they're good but on the other hand, there's a little fire inside of me that drives me to beat those riders one day. I hope that happens, maybe not next year or the year after but at some point I want to get there."

The move to FDJ comes at the right time for Uttrup Ludwig, who rode in Bigla colours for three years. According to her, a change of scene and motivation were the drivers in prompting a move, while at FDJ she will be eager to take on more responsibility.

"It should be a natural progression. There are always things to look at and for me, there are a lot of things to look at, from the time trialing to getting into a better shape. I wouldn't say that there's one thing that I'm the best at, and there's always room to learn and improve.

"It was a good time for me to change environment and experience new motivation. I'm excited and I think that FDJ is going to be a good platform for me. They're super ambitious, the sponsors are super committed and they've applied for a four-year WorldTour license."

We're going to be a strong team in hilly races and I'm excited to be going there. They've put faith in me and I think I'll have good opportunities in terms of leadership. One thing I need to improve on is my French though. It's not good and that's my off-season goal. Someone needs to teach me but I might go to school. It was just time for me to have a new environment and a good inspiration."

While Uttrup Ludwig is excited by her immediate future she is disappointed with the fact that La Course has been downgraded to a criterium in Paris that coincides with the final day of the men's Tour de France.

The La Course race provides women's cycling with a unique platform and rare chance for an elite women's race to share a platform with a men's equivalent. While a city-center crit will provide large crowds it will undoubtedly be less engaging than if the women competed over several days and a variety of terrains.

"I think that it's a pity that we've moved the race to be a criterium. On the men's side, there's no equivalent on the WorldTour. I'm not sure this move will show how great women's cycling can be. It would be cool to have a stage race, maybe with a flat stage, a mountain stage and a time trial.

"If you want to show women's cycling on the big stage and there's so much media around at the Tour. That's why we want a women's Tour de France so badly. We don't need to do the same length as the men but if we could get the mountains in, some of the extraordinary things, then that could really show how great it is to watch women's cycling."