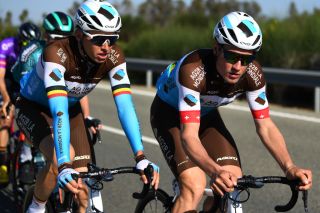 Sylvan Dillier of the AG2R La Mondiale team will not ride Strade Bianche after a final COVID-19 coronavirus test before the race resulted positive.

He was named for the first WorldTour of the rescheduled season by the French team but is not listed in the final start list published by race organiser.

The French team confirmed to Cyclingnews that Dillier tested positive and that he will now have quarantine.

Dillier posted a photo on Instagram on a plane, asking: "Is this the new way of traveling? I have to get used to it first!" However the AG2R La Mondiale told Cyclingnews he didn’t join up with his teammates in Tuscany.

Strade Bianche to be raced under a scorching Tuscan sun

L'Equipe reported that his teammates tested negative. They are expected to start Strade Bianche as planned.

According to Swiss newspaper Blick, Dillier hit out at the UCI COVID-19 protocol designed to protect riders' health and ensure races go ahead. Under the protocol riders have to undergo two COVID-19 tests before they can race, the last within 72 hours of the start.

"The entire health system is a big joke. In my opinion, it is on the verge of locking up healthy people," Dillier told Swiss newspaper Blick. "It's just not right."

"I'm really bummed by this. I am the healthiest person in the world.

"I have had several tests in the past few days and they were all negative. Even with a blood test, all values were good."

The 29-year-old Swiss rider, who finished second to Peter Sagan at the 2018 Paris-Roubaix, was considered an outsider in the Strade Bianche after finishing 14th last year. It is now unclear when he can return to racing and will have to undergo a medical when he is considered negative for the COVID-19 virus.

Dillier's case is the third time riders tested positive or came into close contact with a COVID-19 case before a race. Israel-Start-Up Nation and UAE Team Emirates pulled riders from the Vuelta a Burgos due to the risk of COVID-19 contagion.