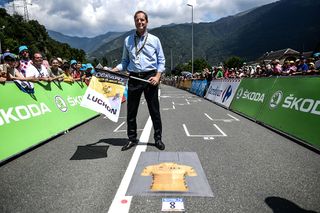 In a normal year, the Tour de France would be about to get underway with pre-race press conferences and training rides. Instead, the coronavirus pandemic has kept riders out of competition for the past 14 weeks and, barring a second wave of COVID-19 cases, the Tour is now four weeks away.

Race director Christian Prudhomme tells the AFP that this year's event will be a "unique and singular" edition, with measures to keep the entourage safe from the virus to be given a dress rehearsal at the Critérium du Dauphiné.

Prudhomme has yet to lay out the details of the sanitary measures that will be taken, saying the situation continues to change day by day. "The guidelines will be defined in late July, early August," Prudhomme said, adding that the same measures would be used in the Critérium du Dauphiné as well as other races on the calendar.

Last week the UCI announced a framework of recommendations for racing to resume under the continuing pandemic, grouping teams into 'bubbles' to better monitor the race entourage. Prudhomme did not specifically address these guidelines in the interview.

In addition to the obvious changes to traditional podium kisses and discouraging autographs at stage starts and finishes, Prudhomme says the public will be allowed to attend, but government guidelines on the allowed size of public gathering will determine to what capacity.

"There will certainly be no kissing or hugging during the ceremonies. And it's certainly not the best year to get autographs. The public will be able to come to the Tour but there will probably be more or less strict security. In the mountains, we will favour those who go up on foot, by bike or on the transport set up by the communities. But, I repeat, the situation is changing from day to day. What will it be in two months?

"What we can say is that there will be a race with the best riders. The publicity caravan will have about 100 vehicles, about 60 per cent of previous years. The economic crisis is hitting the various sectors of the economy."

Prudhomme expects the race to be different to previous years because the later date will mean the weather will be different.

"It will be a unique Tour, since it will be the latest ever, formally in the summer but outside the holiday period. A singular Tour, there will be some real questions about the riders whose method of preparation will be necessarily different this year. The weather is likely to be less hot and there will probably be more wind. On the roadside, there will probably be fewer people, but the party will be there, with respect to health measures."

Throughout the ordeal of postponing the Tour and all the uncertainty surrounding the pandemic, Prudhomme said he was "struck by the unity of the cycling world and the authorities' willingness to listen" but said it is his organisation's job to adapt.

"We began to take up the challenge by obtaining the approval of all the elected officials concerned. What I have heard most often is 'The Tour will always be the Tour'. It was fascinating! In sporting terms and in the media, the Tour is the same. On the other hand, we had some patches to put in, because we couldn't take exactly the same route in September. In Lyon, for example, we have three kilometres less on the stage, the climb to Fourvière is shorter. But that's marginal!"