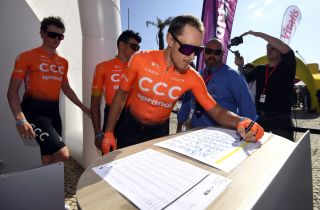 After two years spent at Mitchelton-Scott, Matteo Trentin is starting on a new adventure with the CCC Team this season. He joins Greg Van Avermaet at the squad, which has undergone a revamp for its second season since the shift from BMC.

Trentin is one of several new names at the Polish squad and is at the Volta ao Algarve for his third race of 2020 – the second alongside Van Avermaet – with the pair gearing up for a two-pronged attack at the Spring Classics.

The Italian sprinted to third on Wednesday's opening stage in Lagos, following Fabio Jakobsen (Deceuninck-QuickStep) and Elia Viviani (Cofidis) across the line for his best result of the season which had included two top 10 stage finishes to that point.

"It has been good," Trentin told Cyclingnews. "We have a very good team. Of course, maybe the results haven't been what we've been looking for, but you also have to look at how the stages are designed. Like Valenciana [where Trentin won a stage in 2019] was completely different from last year and in Murcia we got a good result with Josef Černy."

With two pure sprint stages and two tough hilltop finishes making up the bulk of the race, there's nothing on the menu that perfectly suits Trentin in Portugal (stage 4 to Malhão could be one for Van Avermaet, Trentin said), so CCC had to get creative in the stage 1 finale.

The men in orange were among several teams who pushed the pace and went on the attack on the unclassified hill with 20km to race. The reason? To try and wear out the likes of Viviani and Jakobsen before the finishing stretch on the coast in Lagos.

"We decided that we will try to shake it up a little bit with some attacks in the tricky part with 20km to go," Trentin said later. "We started to race quite hard from there to the last 10km. It helped tire the legs of the guys who were looking forward to the sprint."

Trentin was up there on the run-in, protected by his CCC teammates, but was boxed in behind Viviani and Jakobsen for the final dash to the line. Nevertheless, he was pleased with his efforts.

"Third place is good, especially with all the sprinters around me," he said. "It's a good step forward from the last two weeks."

While it's one of the biggest races of these important early months of the season, the Volta ao Algarve isn't a major season goal for the stars that have headed to the south of Portugal this week. It's no different for Trentin either, of course, with the spring Classics and Grand Tour stages set to be his main aims for 2020.

But the big goal for the Italian is a simple one – to win.

"Of course, my goal is to be the best that I can and to take victories. Winning is the main goal, for me and for the team. If it's me or if it's Greg, the main goal is winning."