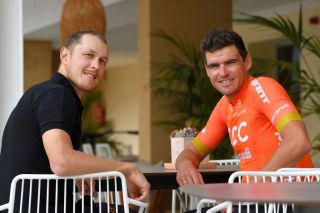 Greg Van Avermaet and Matteo Trentin, an eagerly anticipated new partnership at CCC Team, will race together for the first time next week as they make their season debuts at the Volta a la Comunitat Valenciana.

Van Avermaet has been the linchpin of the team's Classics department for a number of years, and was left as the talisman of the whole squad last year as the old BMC Racing set-up became CCC Team.

The team has strengthened for their second campaign in orange, and Trentin, a former European champion and stage winner in all three Grand Tours, is the biggest signing. As well as offering sprint and breakaway opportunities in Grand Tours, he'll share leadership with Van Averrmaet in the Classics.

The pair didn't know each other well, but they've been on team training camps over the winter and will now race together for the first time at the five-stage Volta a la Comunitat Valenciana, which runs February 5-9.

"Our Classics group knows each other really well and it’s just Matteo joining us this year but obviously he is a strong rider and a good addition to our group so it will also be good to start working with him early in the season and see what we can do together," Van Avermaet said.

Trentin added: "I am really looking forward to making my debut with the team and I can’t wait to show off my new orange jersey. I want to get back into the rhythm of things at this race and start working with my new teammates because, for me, the most important thing will be to create a nice group atmosphere that will allow us to work towards the biggest goals of the season."

Both Van Avermaet and Trentin won stages at last year's edition of the Volta a la Comunitat Valenciana, and will lead the line for CCC next week alongside Michael Schar and Nathan Van Hooydonck, who are key parts of the Classics squad.

"The parcours is a bit different this year and it has a very difficult mountain stage, the final climb of which we have been able to recon at training camp. This is definitely where the general classification will be won," said CCC director Valerio Piva.

"I think Greg and Matteo will be our two biggest cards to play and I think we can use the strengths of both riders on the different stages. Overall, we can be confident with the riders we have on the start line. This will also be the first time that the core members of our Classics group race together so we also want to use this opportunity to test how they can work with one another, which will be important as we look ahead to the bigger objectives that we have this season."

Van Avermaet, who starts his season at the Spanish race for a fourth consecutive season, added: "I think it is one of the best races to start the season in Europe. We are all motivated and, as always, we will try to race to win but even though that is important, the main goal will be to test my shape and to see where we all are after the winter.

"This year’s stages are not completely in my favor with some sprint stages and one really hard stage but we will try to do our best and hopefully I can be up there and get close to the victory on one stage."