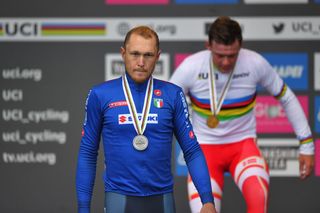 A disappointed Matteo Trentin of Italy walks away from the podium with his road-race silver medal at the 2019 UCI Road World Championships in Yorkshire (Image credit: Getty Images)

Following two years with Australian WorldTour team Mitchelton-Scott, Italy's Matteo Trentin is looking forward to a new challenge with Polish outfit CCC Team in 2020, and has Milan-San Remo at the top of his wish list.

The 30-year-old took six wins in 2019, including a well-taken solo victory on stage 17 of the Tour de France in Gap, and later took the silver medal at the World Championships road race in Yorkshire, held in apocalyptic conditions.

"I was disappointed to have lost my big chance," Trentin told Tuttobici of his Worlds disappointment in an interview published this weekend. "I don't know if it will happen again, but I keep telling myself that I took a silver, and that coming away empty-handed would have been worse."

A fresh start with a new team, and aiming high at a Classic as prestigious as Milan-San Remo, however, would also help to put that disappointment behind him.

Trentin has twice finished in the top 10 at the Italian Monument – 10th both times, in 2016 and this year – and so knows victory there one day is within his capabilities.

Asked whether it was the Classic he'd most like to win, and whether winning it would be life-changing, Trentin was a little more measured.

"If I could choose two races to win, they would be San Remo or the Tour of Flanders," he said. "All the great Classics, the World Championships and the Grand Tours – winning any of those kinds of races would change your career.

"But life-changing? No – I love what I have," said Trentin, referring to his wife and their two children.

"I wouldn't want them to ride bikes," he added. "If they really insisted, I'd try to steer them towards mountain biking or cyclo-cross. Unfortunately, training on the road has become too dangerous, although I've become used to it now. But it isn't only a problem in Italy."

When Trentin turned professional with the Belgian QuickStep team in 2011, he was one of few Italian riders plying their trade at WorldTour level with a non-Italian team. He stayed with Patrick Lefevere's squad for the following six seasons before joining Mitchelton-Scott, and his latest move to CCC means that he still hasn't ridden for an Italian team at pro level.

"Italy remains one of the historic cycling countries, but it's become very difficult for those trying to run the sport there," Trentin told Tuttobici. "There's a real lack of teams and structure, and it's difficult to get kids riding. Fewer kids are riding, so it's harder to find talent.

"But it's a problem linked to the country's economy. If it recovers, cycling will surely find its way again," he said.

Trentin has also always been prepared to talk politics – and speak his mind – on social media, and will continue to do so as he makes his move to a new team and starts a new season.

"I'm not afraid to say what I want to say. Even politics has moved to social media; it's a way to light the fuse in times like these," said Trentin. "It can work, provided you pay attention to what you say and how you say it. It doesn't take much to trigger pandemonium. That's the beauty and the ugliness of a medium that allows everyone to say what they want."