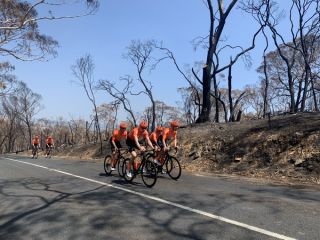 The CCC Team visited the Adelaide Hills before the Tour Down Under (Image credit: CCC Team/Twitter)

The CCC Team riders in Australia for the Tour Down Under visited the Adelaide Hills affected by recent bushfires on Tuesday, as the local residents confirmed the area is ready to welcome the race when stage 2 starts in Woodside.

Simon Geschke, Joey Rosskopf, Fran Ventoso, Lukasz Wiśniowski, Szymon Sajnok and Josef Cerny rode through the areas hit by the bushfires and spent time with local people in Woodside, who were preparing banners to welcome the race.

"Every January the town in the Adelaide hills come out and show us so much support at the Tour Down Under. We are humbled to have the opportunity to show our support for the people who have lost loved ones, homes, business and land in the catastrophic bushfires currently raging across Australia," the CCC Team said via social media.

"We would like to extend our condolences to everyone impacted by the bushfires, and our support and thanks to all of the firefighters, emergency service personnel, and volunteers who are tirelessly working to protect the country."

The bushfires have damaged huge areas of Australia, with harrowing images of volunteer fire fighters taking on the fires, and koalas and kangaroos trying to escape the flames.

Flames have swept across Australia’s southeastern mountain and coastal areas, leaving Sydney and other areas under smoke. While the Adelaide area has been hit by some major fires, the biggest seen on television around the world are are hundreds of miles away from Adelaide, with the wind blowing the smoke east, away from the city and the area where the racing will be held.

Race officials have confirmed they are working closely with authorities to monitor fire danger, air quality, and other safety issues affected by any local fires. However the Adelaide Hills area wants to show they are ready to host the Tour Down Under despite the recent damage.

"We are in discussions with the Adelaide Hills Council, who are committed to seeing the Santos Tour Down Under running through the region," Tour Down Under officials said in a statement.

"The Council and DPTI [South Australia planning department] are working hard to ensure the routes are safe so both the men’s and women’s races can go ahead as planned."

"We hope we can help bring more awareness and have an impact in a positive way," Rosskopf said. "It's great the communities are behind the race even if they've got a lot more bigger things to worry now.

"It's wild to see that it stops just a couple of blocks from town and that the firefighters can control and defend the towns, because everything leading up to here is wiped out."

It was wonderful to visit the bushfire affected town of Woodside this morning and see the community busy at work preparing the @tourdownunder town decorations.We’ll see you again soon 🧡 pic.twitter.com/fmzp8slX1yJanuary 7, 2020