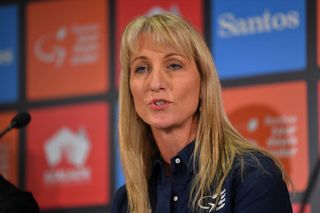 Kimberley Conte – the race director of the Women's Tour Down Under, which starts on Thursday – has said that the decision to still take stages of both the women's and men's events through areas of South Australia that have been affected by the recent bushfires will help to show visitors that they're still open for business, and so help them rebuild.

Talking at the pre-race press conference at the Hilton hotel in Adelaide on Wednesday afternoon, Conte said that the race is set to continue on its planned route as things stand, but that the safety of everyone involved with working on, and watching, the race is the priority.

"These areas that we're riding through, particularly on stage 2 [Murray Bridge-Birdwood] and stage 3 [Nairne-Stirling], are some areas that have been hit by the fires. Our teams have done a fantastic job of making sure that the routes are safe, and the councils, particularly, have asked us for our help," said Conte.

Santos Women's Tour Down Under 2020 - Preview

"We can show our support, and we can show people that these areas are, as they say, open for business, and they want to make sure that the visitors continue to come, so for us it's a real honour to try to play a small part and come back to these areas that have been affected," she said.

"Going through some of these areas, it's quite heartbreaking, and gut-wrenching, to see so many families that have lost homes, and people that have lost their livelihoods, and livestock, and that the wildlife has taken such a hit," Conte said. "But despite these terrible circumstances, we've seen some of the best of Australia as we've seen so many people come together here in the Adelaide Hills, and those areas that have been impacted. We've seen the best of the Australian people.

"With regards to smoke," Conte said, which has in recent weeks drifted across the state from fires on Kangaroo Island, off the west coast of Adelaide, "we're working really closely with the Bureau of Meteorology, and being really careful with what we expose our athletes and the general public to.

The Women's Tour Down Under runs from Thursday, January 16 – starting in Hahndorf, south east of Adelaide – to Sunday, January 19, when it finishes with a circuit race in central Adelaide, which will be the same course used later in the day for the men's Schwalbe Classic, taking place two days before the start of the men's stage race.