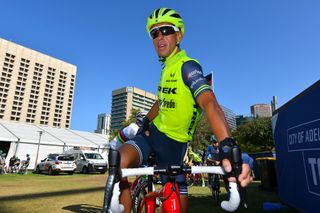 Richie Porte and his Trek-Segafredo teammates head out on a training ride ahead of the start of the 2020 Tour Down Under in Adelaide, South Australia (Image credit: Bettini Photo)

"It was, to be honest, a good feeling to get into Paris, finally, after a couple of years of not making it," Richie Porte says of having reached the French capital in 11th place overall last July. "It wasn't the Tour de France that I wanted, but I guess to finish the Tour is the most positive thing that came of it."

In both 2017 and 2018, the Australian climber's Tour had ended early with crashes on what just happened to be stage 9 on both occasions. Race followers feared the worse as stage 9 approached once more, but after getting through unscathed, Porte was in on the joke, too, tweeting: "Stage 9 done," accompanied by a gif of the actor Jack Black in School of Rock performing a salute.

In 2020 Porte will go into the Tour de France without the doubts of the past and with the added confidence that comes with having settled in to what was, in Trek-Segafredo, a new team last season.

"The team obviously was a bit slow off the mark at the start of the year, but we had a great end of season," Porte tells Cyclingnews, speaking ahead of the start of the Tour Down Under, referring to the likes of Bauke Mollema winning Il Lombardia, Jasper Stuyven's overall victory at the Deutschland Tour and Mads Pedersen becoming road race world champion in Yorkshire. "And that's good for morale, so I hopefully we've got the ball rolling and we can carry it on into this season."

Only a couple of years ago, Porte's coach suggested that the Tasmanian might benefit from starting his season later, and skipping races like the Tour Down Under entirely. Even if last year's Tour de France didn't go as he'd hoped, 11th place overall was nevertheless a fine result, but a long way off his best finish at La Grande Boucle of fifth in 2016.

"It hadn't really crossed my mind to miss the Tour Down Under," Porte says. "You just focus on one race at a time, and it's an Olympic year as well, and I'd like to go to Tokyo, and that's pretty close to the end of the Tour de France.

"I'm motivated this season – as always – so you've just got to keep on keeping on," he continues. "I think it was hard last year, with a new team, and being a first-time parent – things like that," continues Porte, whose wife gave birth to their son mid-way through the 2018 season.

"Now I've had two months in Tasmania, just training and just focusing on being healthy, and I'm feeling ready for the season. I chose not to do the Australian National Championships this year, and Tassie's just such a great place to train: it's just so easy, it's quiet, there are no distractions, and the training's super good."

Porte still has to wait to see whether he'll be selected for this year's Australian team for the Olympic road race. As a climber, and with a hilly course in Tokyo awaiting the riders just a week after the finish of the Tour in Paris, you'd imagine that Porte would be a shoo-in for the selectors along with time trial favourite Rohan Dennis, Jack Haig and other talented climbers.

That week following the Tour is going to either make or break a lot of riders; few will be able to predict whether they'll come out of the race dog-tired or in flying form, with Movistar's Alejandro Valverde planning to quit the Tour early in order to rest a little before the Games. Geraint Thomas appears to have put a second Tour de France victory ahead of Olympic gold while Vincenzo Nibali has opted to target the Giro d'Italia so he can be at  his best for Tokyo.

Porte hopes to find a perfect balance between the two big goals of the 2020 cycling season.

"Of course, you can come out of the Tour one of two ways, and then put the journey to Japan on top of that…" says Porte.

"Being an Aussie, you're perhaps a little bit ahead with the whole travel and jet lag thing, and you get used to that. But I think that if my form's good at the end of the Tour, then it's not such a long time to try to hold on to it.

"But the biggest thing is even being selected, to be honest, so we'll cross that bridge when and if it comes," he admits.

This year's Trek-Segafredo team has seen some quality new names come into the fold, while other, younger riders, have stepped up to the plate.

"Overall, the team's significantly stronger, with [former Team Ineos rider] Kenny Elissonde, who lives close by to me in Nice and is a good friend, and someone like Vincenzo Nibali coming in is a great thing for the team, and also takes a bit of pressure off me," says Porte.

"And Giulio Ciccone obviously blossomed as a rider last year," he says of the 25-year-old Italian who won a stage and the mountains jersey at the 2019 Giro d'Italia.

"That wasn't really a surprise, as I knew how good he was from training camps, but I think we've got a much more well-rounded team. We've then also got guys like Mads Pedersen, who had such a fantastic race to win the World Championships road race, and to have that rainbow jersey on the team means a lot, too.

"You're always going to need guys with experience, but I think there's definitely this next generation coming through with so much talent. I don't think our generation's done just yet – you see someone like [37-year-old] Philippe Gilbert signing a new three-year-contract with Lotto Soudal – but we saw various examples last year that the new generation's come in fast," says Porte.

The Tour Down Under

Before anything comes this year's Tour Down Under, where Porte won overall in 2017, and where has finished second overall for the past two years behind Mitchelton-Scott's Daryl Impey.

Impey's Mitchelton sports director Matt White has called this year's route the hardest ever of the race, and Porte would be only too happy if that proves to be the case, although he knows that converting those two most-recent second places into victory will be far from easy.

"The Tour Down Under used to be about the Aussie guys with their summer form, but lately the European winters have been so good that everybody's coming here ready to go, with WorldTour points on the line, and that's what the teams are after," he says.

"Daryl's done a fantastic race the past two years, and you can never rule him out," Porte adds.

"He could get up Paracombe [on stage 3], and he got up Willunga Hill [stage 6] pretty well last year, too, so you don't know.

"A guy like him can take bonus sprints along the way, too, so there are so many different scenarios. But I think this year definitely is going to be more of a climber's race. Fingers crossed, anyway."