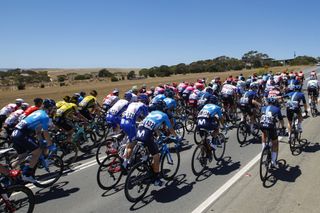 The 2020 Tour Down Under is set to take place despite Australia's ongoing bushfire crisis (Image credit: Bettini Photo)

The 2020 Tour Down Under is set to continue despite Australia's on-going bushfire crisis, which has particularly affected large parts of the states of New South Wales and Victoria, and, to a lesser extent, the Adelaide Hills in South Australia, with the latter featuring on the routes of both the women's and men's stage races, held between January 16 and 26.

The race organisation released a statement across the weekend, stating that it was committed to staging the race as planned, but that "the safety and wellbeing of everyone involved… is our priority".

"Our thoughts are with those people and communities affected by the bushfires, and certainly with the CFS [Country Fire Service] and others who continue to work so hard to keep South Australian people and property protected," the statement read.

"We are in discussions with the Adelaide Hills Council, who are committed to seeing the Santos Tour Down Under running through the region. The Council and DPTI [Department of Planning, Transport and Infrastructure] are working hard to ensure the routes are safe so both the men's and women's races can go ahead as planned.

"In talking with the Adelaide Hills Council, the most significant thing we as a race can do at this time is to promote that the Adelaide Hills are open for business, to promote the region and encourage people to travel into and support the region. We are working closely with Council, emergency services and the local communities and will continue to monitor the situation," it said.

"As always, the safety and wellbeing of everyone involved with the Santos Tour Down Under is our priority."

In attempting to continue, the event will ensure that communities will benefit financially from visitors spending money to follow the event, while Australia's sporting community has already proved that it's able to support the work of firefighters and those affected by the disaster.

Tennis player Nick Kyrgios last week pledged to donate AU$200 to fire relief efforts for every ace he serves during the Australian summer – a gesture quickly followed up by a number of other tennis pros, with fellow Australian and current women's world number one, Ash Barty, pledging to donate all her winnings from the Brisbane International tournament, which runs from January 6-12, to the Red Cross in order to help those affected by the fires.

Within cycling, defending Women's Tour Down Under champion Amanda Spratt last month told Cyclingnews that she was prepared for evacuation from her home in the Blue Mountains, west of Sydney, with her Mitchelton-Scott team sharing the donation pages set up for the NSW Rural Fire Service and the CFS Foundation to help support volunteer and emergency firefighters during the bushfire crisis.

Three-time road race world champion Peter Sagan (Bora-Hansgrohe) – who's raced at the Tour Down Under for the past three years – has also extended his best wishes to those affected.

"I'd like to take the opportunity to express my sympathy and solidarity with all Australians that have been suffering from the terrible fires that have affected the country during the last few weeks," Sagan said in a Tour Down Under press release.

The Slovakian will not take part in this year's race, preferring this year to start his season at the Vuelta a San Juan, in Argentina, later this month.

"Unfortunately, this year, my racing schedule is a bit different and I won't be riding on the roads of the City of Adelaide and South Australia," Sagan said. "I will certainly miss the crowds up on Willunga Hill three weeks from now, but I look forward to coming back soon."