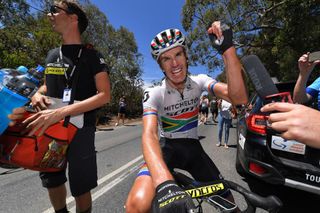 South Africa's Daryl Impey will head Mitchelton-Scott's seven-man squad for the Tour Down Under in January, hoping to take what would be the 35-year-old's third-straight victory at the Australian WorldTour stage race.

Impey took his first title in 2018 by 'countback' – by finishing more consistently on the previous stages – after finishing on the same time as 2017 winner Richie Porte. Impey again did enough on the final stage to Willunga Hill to win the 2019 edition by staying in as close contact as he could to stage winner Porte and beat the Australian by 13 seconds overall.

An even tougher course this year – and Porte's announced return – will mean that Impey will truly have his work cut out to take a third title, but he says that he'll be giving it everything in both the build-up and during the race itself.

"My preparation is going quite well, especially since I started differently to in the past," Impey said in a team press release. "Normally, I'm already back in South Africa in October, but this year I spent more time in Europe to relax following a busy season, and only arrived in mid-November.

Richie Porte returns to Tour Down Under

"It takes a lot of effort to be ready in January, and it's quite challenging because all my family and friends are starting to relax before Christmas, while I'm trying to build for the TDU," he said. "I have a big support structure with my wife making sure I can tick all the boxes and focus on my training, so it's easier when you have that.

"And I get motivated because I know I have six other guys from the team working their arses off in December, too, and it's a race I love, so for me it's pretty simple. It is getting harder each year but the last Tour Down Under really gave me such a big lift for the season."

This season, Impey went on to defend his national titles in both the time trial and the road race back in South Africa, and took his first Tour de France stage victory in July when he outfoxed and outpowered Lotto Soudal's Tiesj Benoot to win stage 9 in Brioude.

A third overall victory would still leave Impey one short of the all-time record of four victories, held by his former Mitchelton-Scott teammate Simon Gerrans – who won in 2006, 2012, 2014 and 2016 – but veteran Impey is only too aware that nothing comes easy.

"I think my chances are as good as all the other favourites, and it's about making certain stages count to put myself in a position to win it. It is harder because you have a target on your back, but when your form is good enough, it's still down to who has the best legs in January," said Impey.

"Daryl will be sure to have a huge target on his back," race director Mike Turtur agreed in a race press release.

"The 2020 Santos Tour Down Under will no doubt be a big challenge for him aiming for three-in-a-row, but Daryl was the first rider in event history to win the race two years running," he pointed out.

"Overall, it is more suited to climbers, so it will be tougher for guys like me," admitted Impey. "You'll need a stage win in the bag to be able to fight for the win. Willunga is always special, and I hope to be going for the overall victory still on that day

"All I can do is work as hard, if not harder than in previous years. No doubt there will come a time when I won't win it, and that may be this year or it may not, but I try not think about it. Earlier this year, I went in giving my best, and the same will happen next year, too," he said.