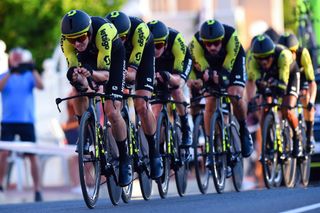 The UCI announced today that it has granted licences to Mitchelton-Scott's men's and women's teams for the WorldTour and Women's WorldTour, respectively.

The teams were left off an initial announcement of the approved teams on Tuesday because some of their paperwork had been delayed.

"They will be registered respectively as UCI WorldTeam and UCI Women’s WorldTeam for the 2020 season," the UCI said.

Nineteen teams have been approved for the 2020 UCI WorldTour, with Cofidis a new arrival and Israel Start-Up Nation (formerly Israel Cycling Academy) taking over Katusha-Alpecin's licence.

The UCI said it is still considering an application from Bingoal-WB for UCI ProTeam (formerly Professional Continental) status.

"Regarding the UCI ProTeams, the file of team Bingoal-WB (tbc – BEL) is still under review by the UCI Licence Commission. A decision will be issued as soon as possible," the UCI said.

Should the application be approved, Bingoal-WB would be the 19th ProTeam for 2020.