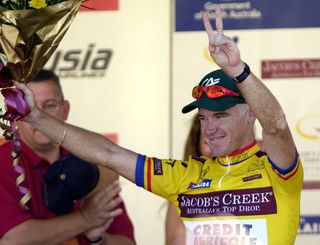 Stuart O’Grady has been appointed the new Tour Down Under race director (Image credit: Getty Images)

Stuart O'Grady has been named as the new race director of the Tour Down Under, taking over the leadership role from Mike Turtur after the 2020 event.

O'Grady won the Tour Down Under in 1999 and 2001 during his long and successful career as a professional. He won Paris-Roubaix in 2007, twice wore the yellow jersey at the Tour de France, and won a gold medal in the Madison with Graeme Brown at the 2004 Olympics in Athens.

In 2013, O'Grady admitted to using EPO before the 1998 Tour de France after his name appeared on the 'suspicious' list for EPO published by the French Senate in a retrospective testing investigation.

5 conclusions from the 2019 Tour Down Under

The list included a number of high-profile riders from the 1990s, including Marco Pantani, Laurent Jalabert, Bobby Julich, Jan Ullrich, Andrea Tafi and Erik Zabel. Many also went on to admit doping but have remained in the sport in different roles.

O'Grady is from Adelaide, where the Tour Down Under is held each January. He will take over the mantle of race director after serving a one-event apprenticeship under Turtur for the 2020 race.

"My appointment to this role really is the pinnacle in my career," O'Grady said in the official announcement from the race.

"I have lived my life and career with the international cycling community, so this is a defining professional and personal moment for me.

"I’m excited that I will be delivering a race in my hometown, with one that I competed in, won and have watched grow its cycling participation and fan-base over the years. I am looking forward to developing my vision, and a creative race that will lead to the ongoing growth of the men’s competition and to the overall race itself.”

Cyclingnews will have full coverage of all the Tour Down Under, with live updates, reports and news.