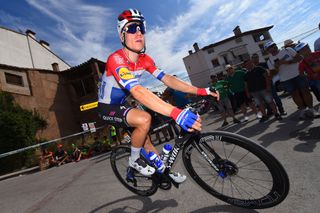 The Tour de Pologne race organisers have released a statement following a horrific crash during the final sprint of stage 1 that resulted in Deceuninck-QuickStep sprinter Fabio Jakobsen being airlifted to hospital with life-threatening injuries on Wednesday.

Race director Czeslaw Lang said he feared the worst for Jakobsen, who has been placed in a medically-induced coma, but after visiting the Santa Barbara Hospital in Sosnowiec, Lang was relieved to learn that the rider's condition had stabalised.

"I followed the situation from the beginning," Lang said in a statement released by the organisers of the Tour de Pologne. "I have just come back from the Sosnowiec Santa Barbara Hospital. After speaking with the director, I can say that I am somewhat relieved. After seeing the crash, we feared the worst, but now we know that the situation is serious but stabilised."

The crash happened during the final metres of stage 1 where Dylan Groenewegen (Jumbo-Visma) and Jakobsen were sprinting for the finish line in Katowice. Video footage shows Groenewegen deviate from his line towards the righthand side of the road and Jakobsen crashing through the road-side barriers.

Groenewegen crossed the line first but also lost control of his bike and crashed just after the finish line. Half a dozen riders went down in the incident, including Marc Sarreau (Groupama-FDJ), Jasper Philipsen (UAE Team Emirates), Damien Touze (Cofidis) and Eduard Prades (Movistar).

"A serious high-speed crash disrupted the first stage of the Tour de Pologne. In the last 150 metres, Dylan Groenewegen and Fabio Jakobsen were fighting for the victory when the Jumbo-Visma rider deviated from his line causing the crash of the Deceuninck-QuickStep sprinter who fell against the barrier. Many riders who were at the front were involved in the accident," the race organisers said in a statement.

Race medical services immediately treated Jakobsen on-site, and he was subsequently airlifted to hospital in serious condition, and placed in a medically-induced coma in the intensive care unit at the hospital in Sosnowiec. Deceuninck-QuickStep have also released a medical update confirming that Jakobsen’s condition is serious but stable.

A course-side official was also impacted by the crash and was transported to hospital. Lang confirmed that the official suffered a head injury and is now in stable condition.

"The race official also involved in the accident suffered a head injury but has already regained consciousness and is now in a stable condition," Lang said. "I really want to send a heartfelt thank you to the doctors and hospital staff for their prompt care and assistance and I also very much wish all the athletes involved in the crash a fast recovery."

The UCI released a statement following the crash saying it condemned the behaviour of Groenewegen. The severity of the incident prompted the sport's international governing body to immediately refer the matter to the Disciplinary Commission with a request to impose sanction against Groenewegen.

The commissaires' panel at the Tour de Pologne disqualified Groenewegen from the race and fined him 500CHF.

"The UCI has found the behaviour of Dylan Groenewegen unacceptable, and has disqualified the Jumbo-Visma rider, assigning the stage victory to Fabio Jakobsen," race organisers said.