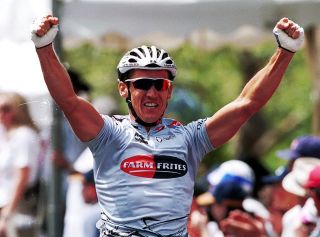 Former sprinter Robbie McEwen has called on race organisers and the UCI to take greater responsibility for rider safety and ensure that riders’ concerns are given more attention.

The Australian was reacting after Wednesday’s horrific crash on stage 1 of the Tour de Pologne that left Fabio Jakobsen in an induced coma, a race official unconscious, and several riders needing immediate medical treatment.

Jumbo Visma’s Dylan Groenewegen was held responsible for the incident, with the UCI laying the blame for the crash on the Dutchman’s shoulders. He was disqualified from the race and fined, while the win was awarded to Jakobsen.

"The UCI, which considers the behaviour unacceptable, immediately referred the matter to the Disciplinary Commission to request the imposition of sanctions commensurate with the seriousness of the facts," a press release stated.

While Groenewegen’s team later apologized for the crash in which their rider deviated from his line and forced Jakobsen into the barriers, McEwen told Cyclingnews that the crash should be examined by those in charge of the sport.

“The most important thing is that everyone is thinking about Fabio Jakobsen and hoping that he pulls through and recovers,” McEwen said.

McEwen, who retired in 2012 after a career that spanned three decades and included three green jerseys and 12 Tour de France stages, also criticized Groenewegen for his sprint but the 48-year-old also stated that he had approached the UCI with ideas on how to improve rider safety in sprints but had never even received a response.

“In no way am I condoning the move from Groenewegen,” McEwen said.

“He came across too much, and it’s a fine line in pro cycling. The idea is that you keep the door closed just enough without riding someone into the barriers. He started from too far out and he had too far to get across. It’s a miscalculation but in no way would his intention have been to make another rider fall off, but the horrific crash is a direct result of that.

“What was most disturbing to me was that when Fabio Jakobsen hit the barriers, he didn’t deflect back into the road. He went straight through them. That’s really poor planning, not just from the organisers themselves but the UCI, and they have to take responsibility for that. This is something that has been going on for years. I lobbied for it when I was racing, and I’ve been retired for eight years.

"I put forward a barrier design to both the UCI and the ASO at the same time, for exactly the circumstances like this. While things have improved at some races, a good barrier set-up has to be solid, it can’t come apart, and it’s got to be heavy. The board on the front of the barrier also has to come down at an angle and meet the road. Everything has to deflect the rider back onto the road.

"The barriers in Poland flew every which way, and it looked to me like they were made of plastic. One of them broke into pieces and that doesn’t happen with the metal ones. There’s a lot to be done in regard to safety in the last few hundred meters.”

The stage 1 sprint in Poland has been used for a decade and its downhill nature has been criticized in the past. McEwen called downhill sprints ‘not ideal’ and while he acknowledged that organizing racing was not an easy task, the results of yesterday’s crash, or at least the severity of the injuries, could have been avoided if the powers at the top of the sport had listened more to riders’ voices and concerns.

“There’s a lot involved in organizing races with sponsors, locations, and towns paying for finishes but tram tracks shouldn’t be anywhere near a bunch of riders, especially with bunch finishes, but things could have ended so much better. Badly, but still better than what we have now.  We could be just talking about a DQ, a nasty crash, and a guy covered in bandages but being able to start riding in a week or two. Instead, we’re talking about a guy in a critical condition fighting for his life. It’s horrific," McEwen said.

“They [ed. the UCI] should finally start listening to the riders and the CPA. There needs to be a certain set of guidelines for every race, no matter what level of racing or location.”

McEwen’s heart went out to all of those involved, including Groenewegen, who is now facing possible, disciplinary measures, but mostly Jakobsen who remains in intensive care.

“I’m also sure that Dylan Groenewegen feels absolutely terrible, and I’m sure that he is getting the support he needs. Although the crash was his fault he must be beside himself. That’s nothing compared to the family or friends of Fabio Jakobsen.”

Cyclingnews has reached out to the UCI to ask if they would review the future use of the stage 1 finish, and if they would look at safety barrier improvements.