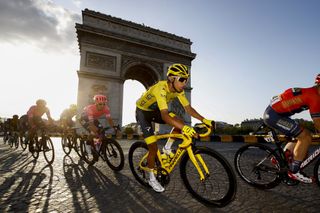 However, a few hours later the French Ministry of Sport clarified that it might not affect the Tour. "Just because major sporting events can't go through until the end of August doesn't mean the Tour will be postponed or canceled," the ministry said, according to Sporza. "But it can have consequences for the number of spectators."

Philippe addressed the national assembly on Tuesday to lay out plans to gradually reverse lockdown measures taken to halt the spread of the coronavirus causing COVID-19 outbreaks across the country.

The announcement led the national Ligue 1 and Ligue II football leagues to cancel their seasons, as the Prime Minister specified that no event where more than 5,000 people gather would be allowed until at least September.

"I would like to make clear, no large sports gathering or any gathering of 5,000 people or more, needing the permission of the local police and long prior arrangements, will be allowed before September," Philippe said, according to AFP.

The 2020 Tour, originally scheduled to start in Nice on June 27 and finish in Paris on July 19, was recently rescheduled for August 29-September 20.

Three days of racing were planned in August in the south of the country, preceded by the usual teams presentation and Grand Départ events, which also attract large crowds.

The Prime Minister's pronouncements would seem to prevent the possibility of this going ahead as planned. Tour de France director Christian Prudhomme has already ruled out holding the race without crowds, or 'behind closed doors'.

When contacted by Cyclingnews for a response to the Prime Minister's guidelines, ASO declined to comment.

The SARS-CoV-2 virus has caused the deaths of over 23,000 people in France, which has the fourth highest number of infections of any country behind the USA, Spain and Italy.

French cyclists have been barred from training outdoors since the lockdown, but that restriction could be eased after May 11 if the pandemic has come under control.

The Prime Minister said they would make a decision on May 7 to lift the stay-at-home order, but expects that even if the lockdown is lifted, gatherings organized on public roads or in private places would continue to be limited to 10 people.

The Prime Minister's speech on Tuesday throws fresh uncertainty over a revised 2020 cycling calendar that had only just been drawn up and is still in the process of being fleshed out.

The Tour de France, widely seen as crucial to the sport's ability to navigate the pandemic, was to be followed by the World Championships, Giro d'Italia, and Vuelta a España, with certain Classics to be held on as-yet unspecified dates.

Racing is officially suspended by the UCI until July 1, and it was envisaged that the riders would have opportunities to race ahead of the Tour, with the Critérium du Dauphiné - a traditional warm-up event - in the works for August.

It is unclear if the week-long race would involve the gathering of more than 5,000 people, or if it would be classified as a 'major sporting event'. If so, it seems it, too would have to be postponed or perhaps held behind closed doors, if that's deemed safe by the authorities. ASO declined to comment on whether this was a possibility.

Other races in France still scheduled for August include the national road race championships, the Bretagne Classic, the Tour de l'Ain, Tour du Poitou-Charentes, and Polynormandie.