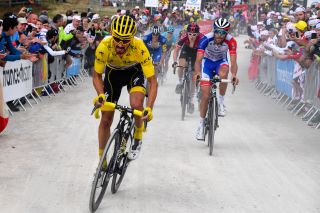 The report comes a day after the French cycling federation (FFC) called on restrictions on riders to be lifted. Competition is currently suspended until at least July 15, and the FFC said that it was "working to find new event formats that could fit within the health restrictions".

Since mid-March, all pros living in France have been forced to train indoors on their turbo trainers, with France operating strict rules on isolation, in a similar manner to in Italy and Spain. Riders living in countries including Belgium and the Netherlands, however, have still been allowed to train outdoors.

Italy to lift ban on outdoor training on May 4

It's already been announced that Italian riders are set to be allowed to train outdoors again from May 4.

France has had 125,000 confirmed cases of COVID-19, and more than 22,850 people have died. The announcement that professionals, and potentially amateur riders, will be allowed to train outside, but only on their own, will be officially presented – along with updates on other measures related to sport, tourism and the food industry – by the prime minister, Édouard Philippe, on Tuesday, according to L'Equipe.

The Tour de France, meanwhile, could still take place from August 29-September 20 – new dates proposed by cycling's governing body, the UCI, and race organisers ASO. However, France's sports minister, Roxana Maracineanu, said last week that "it won't be the end of the world" if the Tour can't take place. "Sport will not be prioritised in our society. It's not a priority today in the decisions taken by the government," she said, but later clarified that the French government's priority remains the health of its citizens during the ongoing coronavirus crisis.

Maracineanu's initial comments prompted a strong reaction from Marc Madiot, the manager of French WorldTour squad Groupama-FDJ, who said that he was "dumbstruck" by the minister's comments.

"I'm struggling to believe they came from the minister for sport, who's there to defend sport," he said. "Sport is an important economic driver."