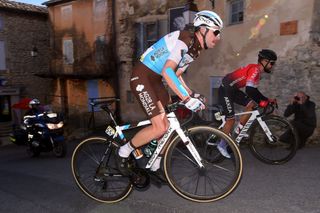 AG2R La Mondiale's Pierre Latour will move to the Total Direct Energie squad for 2021 on a two-year contract, the Frenchman's new team confirmed on Sunday evening.

Latour is a two-time French time trial champion, and won the white jersey as the 2018 Tour de France's best young rider. This season, he'll lead the AG2R WorldTour team alongside Romain Bardet when the Tour starts in Nice on August 29.

"I'm already looking forward to joining the team," Latour said on the Total Direct Energie website on Sunday. "I think it's going to be good to do something different, and to experience a new way of working. The aim of having signed with Total Direct Energie is so that I can keep progressing.

"I love the way that the team races – attacking and taking risks – as that's what motivates me," he continued. "I've signed with them in order to try to win more races, and being the leader there will give me a lot more opportunities. It's a real chance for me."

Latour will join the likes of Niccolò Bonifazio and Lilian Calmejane on next year's team, which is managed by Jean-René Bernaudeau.

"My interview regarding joining the team with 'JR' was great," 26-year-old Latour explained of the process of signing with the team.

"He arrived by train at the station in Valence. At that time, nothing had reopened," Latour said, referring to the coronavirus pandemic. "So we sat down on a bench near the station to sign the documents. What he said to me gave me a lot of motivation, and I really appreciated the human side of our conversation. I know that the team is truly united, and that the atmosphere there is great, and that of course helped me to make my decision."

Bardet's current teammate Bardet has also been linked with a move away from AG2R at the end of the season, with Sunweb a possible destination.