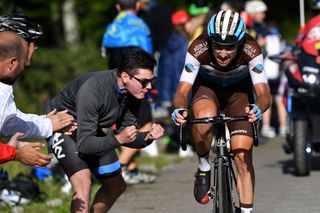 Like Romain Bardet, Pierre Latour is weighing up a move away from AG2R La Mondiale, with Total Direct Energie reportedly leading the race for his signature.

The Dauphiné Libéré newspaper reported on Friday that the 26-year-old, who placed 13th at the 2018 Tour de France, has made up his mind to move to the French team run by Jean-René Bernaudeau.

The move would represent a step down to cycling's second division but Total Direct Energie currently enjoy automatic invitations to all WorldTour races thanks to topping the ProTeam rankings in 2019.

Latour did not confirm the move but acknowledged that Total Direct Energie were among his options, which include staying put.

"I'm in discussion with several teams and Total Direct Energie is one path among others, as is AG2R La Mondiale," he told the Dauphiné. "Nothing is done yet, but I think I'll have decided before the start of the Tour de France."

For his part, Bernaudeau admitted there was interest in Latour, while also referencing the name of Bardet, who has been linked with a move to Sunweb.

"That's part of the rumours in the peloton. We're looking at riders who can shine in the mountains and Pierre is one of them, just like Romain Bardet," Bernaudeau said.

Like Bardet, Latour came through AG2R's development set-up, Chambéry Cyclisme Formation, and established himself as one of the most promising French talents. He won a stage of the Vuelta a España in 2016, won the French national time trial title in 2017 and 2018, and showcased his stage racing potential in 2018 with a number of strong rides, including winning the white jersey for best young rider while supporting Bardet at the Tour.

His 2019 campaign was derailed by injury, while he was set to lead the line for AG2R at the Tour this year, but will now share leadership with Bardet, who'd initially planned to target the Giro d'Italia.

AG2R La Mondiale have already agreed long-term contract extensions with Oliver Naesen and Benoît Cosnefroy but the futures of their Grand Tour leaders remain up in the air. Bardet, who has voiced a need to refresh his career, has been heavily linked with a move to Sunweb, which would in theory open up more of a leadership role for Latour.

However, according to the Dauphiné, the Frenchman is also looking for a breath of fresh air and has already made up his mind.