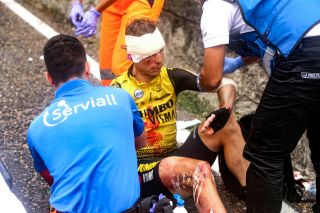 Tony Martin is back training after his nasty crash on stage 19 of the Vuelta a España and hopeful he can ride the mixed relay time trial event that opens the World Championships in Yorkshire on Sunday. Despite his injuries, the veteran German also intends to ride the individual elite time trial on Wednesday – a title he has won four times.

Martin suffered a nasty cut above his right eye and a number of other injuries in a high-speed crash during the stage to Toledo. He was forced to quit the race after working hard for Jumbo-Visma team leader Primož Roglič and so was unable to celebrate with his teammates when Roglič secured overall victory at the Vuelta a España on Sunday.

The crash was caused when Britain's James Knox (Deceuninck-QuickStep) slipped out on a wet descent. Martin, several Jumbo-Visma teammates - including Roglič, were involved, sparking a furious chase on the cross winds after the Movistar team went on the attack.

The attack sparked a huge dispute amongst the riders, with Miguel Ángel López of Astana – who was also delayed in the crash, publicly criticizing Alejandro Valverde and Movistar.

Martin returned home to Germany after receiving medical treatment in Toledo. On Tuesday posted a photo on social media as he prepared to head out for a ride. He still had bandages on his right arm, right leg and around his right eye but was upbeat about his chances of riding at the World Championships.

"Back on my #Bianchi. I still have pain but it feels good to be on the road again. Hope to recover till the Worlds on Sunday," Martin wrote on Instagram.

Martin is due to ride Sunday's mixed relay event with Jasha Sütterlin (Movistar) and Nils Politt (Katusha-Alpecin), with Germany still to name the three women's for the race.

He was selected for the 54km individual time trial along with Politt after winning his ninth German national time trial title in June but was not named in the road race squad.

Back on my #bianchi . I still have pain but it feels good to be on the road again. Hope to recover till the worlds on sunday💪 #teamjumbovisma #everydayriding #roadid Tony Martin