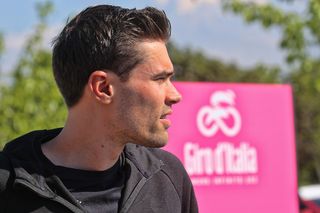 Jumbo-Visma's Tom Dumoulin has yet to race in 2020, and – like his fellow pro colleagues prevented from racing due to the coronavirus crisis – the Dutchman still has no idea when that season debut may come.

The 29-year-old has returned to full fitness following a knee injury sustained in a crash during the 2019 Giro d'Italia, and was training hard at an altitude camp in Tenerife, Spain, in readiness for what was a hoped-for return to competition at the end of March at the now-postponed Volta a Catalunya.

The start to his season had also been delayed by him being unwell with intestinal parasites, and so the enforced shutdown of professional cycling is yet another hurdle that Dumoulin will have to overcome, having not raced since last June's Critérium du Dauphiné.

"I'm fit again, but at the moment I can't do much with it," Dumoulin told Dutch public broadcaster NOS on Sunday.

"It's incredibly frustrating, and I'm really looking forward to the moment when I can pin a jersey number on again. However, that moment seems to be getting further away from me every day," said the 2017 Giro winner.

Along with compatriot Steven Kruijswijk and 2019 Vuelta a España champion Primoz Roglic – neither of which have raced in 2020 – Dumoulin is set to be part of a strong, three-pronged assault by his new Jumbo-Visma team on this year's Tour de France.

However, the Tour is uncertain to happen this year – at least not during its original June 27-July 19 time slot – with race organisers ASO having given a May 15 deadline to announce when the race might take place, which is rumoured to be in late July or August.

"No one is 100 per cent sure what the virus will do towards the summer," Dumoulin said, according to NOS.nl. "I understand that they [Tour organisers] are keeping the door ajar, but it doesn't really change anything too much for me, as I'll be keeping fit anyway."