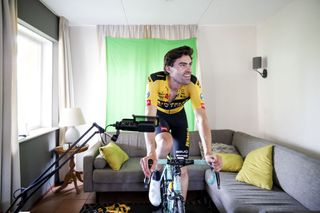 Jumbo-Visma's Tom Dumoulin has told the Dutch media that although he's had a frustrating past 10 months with no racing due to illness and injury, he believes that he's made the right choice by signing for his new Dutch WorldTour team for 2020 – even though he's no longer the sole Grand Tour leader and has yet to turn a pedal in anger for them this season.

With Jumbo-Visma, I really feel as though I've joined the Real Madrid of cycling," Dumoulin said in an interview with Dutch newspaper the Algemeen Dagblad on Sunday, referring to the famously successful Spanish football club. "Plus, they're Dutch, so I couldn't have wished for anything more.

"I just wanted to go to a team where I am not the only leader all year round. Steven Kruijswijk, Primoz Roglic and I want the same thing: to win the Tour. That's also the team's goal, and we'll all have to accept during the Tour that perhaps a teammate is better."

First, Dumoulin has to race at all. His last day of competition was at the Critérium du Dauphiné on June 14 last year – somewhat of a false start following a knee injury sustained in a crash during the 2019 Giro d'Italia.

After recovering, the start to his 2020 season was subsequently delayed due to him being unwell with intestinal parasites. He was training hard at an altitude camp in Tenerife, Spain, in readiness for what was finally hoped to be a return to competition at the end of March at the Volta a Catalunya until the enforced shutdown of professional cycling became yet another blow to Dumoulin.

"Now, with the coronavirus pandemic, I feel half unemployed," said the 29-year-old, who has now returned to full fitness. "I train, but not very hard, because what are you training for? I make sure I stay fit, but try not to get too tired so as not to be susceptible to anything and everything. But I still feel like a cyclist. That's the positive thing to have come out of the past year. I remember how much I enjoy cycling, with everything around it.

"I've been a [professional] cyclist since 2012. I'd always lived with blinkers on. I kept getting better, but the pressure on me also increased," continued Dumoulin.

"Towards 2019, I started to feel the weight of everything, so in that respect it was good to take a forced distance from cycling and the cycling world. I had the space to ask myself some questions: what do I like? What do I not like? How do I deal with that? It gave me a lot of answers."

Asked whether he thought he could still win Grand Tours, Dumoulin was adamant that he could.

"I fully believe that I can," said the 2017 time trial world champion. "The 2018 Tour was one that didn't have that many time-trial kilometres. I lost time on the Mûr-de-Bretagne [stage 6] because of bad luck, and I had far from ideal preparation, but I still finished second.

"Time trials are very welcome, but I don't need them," said Dumoulin. "I was better uphill in 2018 than in 2017. There was an upward trend, but it was mercilessly interrupted."