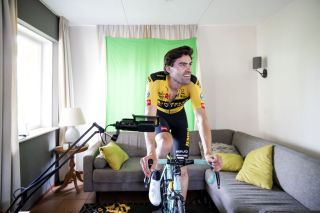 Tom Dumoulin (Jumbo-Visma) rides during the virtual tour of the Amstel Gold Race at a holiday home in Valkenburg on April 19, 2020 (Image credit: Getty Images)

Tom Dumoulin (Jumbo-Visma) joined the virtual edition of the Amstel Gold Race held on Sunday. The 26km ride took place on the BKool platform and included climbs of the Kruisberg, Eyserbosweg, Fromberg, Keutenberg and Cauberg.

BKool is the online platform that also hosted the Virtual Tour of Flanders won by Greg Van Avermaet (CCC). The organisers said that the Amstel Gold Race edition, however, was not a race but rather an event for all riders to enjoy.

There were three start times available on Sunday, with options to ride at 11am, 12pm, or 1pm (CET). BKool also offered a 30-day free trial, so prospective riders could sign up and ride the Virtual Amstel Gold Race without having to pay.

Ahead of the ride, Amstel Gold Race event director Leo van Vliet said the focus of the virtual edition was on "everyone who wanted to take up a challenge, both touring cyclists and pro riders."

Dumoulin was one of several professional cyclists to join the rides. CCC-Liv riders Marianne Vos, Sabrina Stultiens and Jeanne Korevaar, who posted images of themselves on social media under the hashtag #AGRathome. Also on the ride were Chantal Blaak (Boels Dolmans) and Wout Poels (Bahrain McLaren).

Dumoulin wasn't the only Jumbo-Visma rider taking on the virtual world of esports this weekend. His teammate Primoz Roglic, was competing in the Giro d'Italia Virtual while Sepp Kuss claimed victory in the Jumbo-Visma team eRace beating his teammates in the 37-kilometre virtual, home-trainer race held on the Innsbruck course on Zwift.