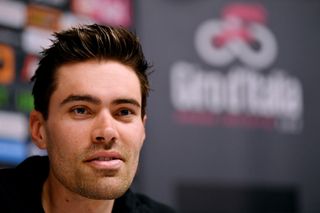 Jumbo-Visma's Tom Dumoulin was obviously happy to see the revised 2020 calendar the UCI delivered on Wednesday – moving the Tour de France start to August 29 and concluding in Paris on September 20 – but the Dutchman, who won the Giro d'Italia in 2017 and planned to contest the Tour this year, told Cyclingnews that travel restrictions due to the ongoing coronavirus pandemic could complicate training for him and his rivals.

Dumoulin is currently in Belgium and able to ride alone outdoors, but if the pandemic does not improve so that travel restrictions can be lifted, and he is unable to train at altitude for a significant block, then he would be unable to ride for the win at the Tour.

"If I can't do an altitude camp, then I can't see myself winning the Tour de France," Dumoulin said by phone on Wednesday afternoon.

"I mean, going for the GC at a Grand Tour asks for specific preparation, and especially requires an altitude camp. That is definitely a necessity to be able to fight for the victory. If it's not allowed to go to an altitude camp this summer, I will probably still be at the Tour de France, but maybe with a different mindset or a different goal."

Dumoulin said that riders who are currently living at altitude and who have the ability to train throughout the summer would have a huge advantage.

"You have some riders who are living in Andorra who can't go outside at the moment, but probably from May or June onwards it will be possible again," he said. "We will see how that evolves, but if they can go outside from May or June, they will definitely have some good preparation because they can train in the mountains and they can train at altitude. So they actually have an ideal preparation for the Tour de France.

"I'm in Belgium at sea level, so I can't do long climbs," Dumoulin continued. "That would be a complete difference in build-up towards the Tour."

Dumoulin has been biding his time in Belgium just across the border from the Netherlands since racing shut down in March. An intestinal parasite delayed the 29-year-old's season debut, which had been planned for February, and so Dumoulin has been in a holding pattern since.

He told Cyclingnews that seeing a semblance of a calendar, even a tentative one, is a positive step that gives the sport something to look forward to.

"Considering the circumstances, I'm fine, but it's a strange world at the moment," he said.

"At the moment, I'm just keeping myself fit, so I'm not training super hard and I'm not training for long. I'm just training enough to be able to step up when necessary. We don't know enough about the whole programme yet to really make a final plan for the last part of the year, but assuming the season actually starts with the Tour de France in the last part of August, we'll soon be planning some sort of preparation for that.

"But at the moment, nothing is certain, and there is also the possibility, of course, that the pandemic doesn't go away as we hope it will, and that racing doesn't continue at all. We just have to keep a good mindset and hope for the best, and we'll start planning soon."

'I have bad days, and I have good days'

Dumoulin is obviously anxious to get back to racing. While most of his colleagues have now been out of action for just over a month, it's been 10 months since Dumoulin last raced – at the Critérium du Dauphiné – as the second half of 2019 was wrecked by the knee-tendon injury he suffered in a crash on stage 4 of the Giro d'Italia.

His debut season with Jumbo-Visma was slated to start at the Volta a Valenciana in February, but illness kept him off the start line. His next date at Tirreno-Adriatico in March was put off because of a parasite in his stomach. A planned start in April was interrupted by the coronavirus pandemic.

"It's been really hard mentally because I was ready for a comeback season. I feel like I had my shitty season last year. Well, obviously the whole world has turned upside down, and this season so far is even shittier than last year. So at times it's mentally quite hard to deal with it.

"I know last year was a big setback, of course, but it taught me a few lessons: that I love this sport and I love the life that I live; that I just love riding my bike and going to races and being out with the team. So that helps me, and whenever I'm a little bit mentally down, I think of that."

Dumoulin's addition to Jumbo-Visma alongside 2019 Vuelta a España winner Primoz Roglic and GC contender Steven Kruijswijk provided the Dutch team with a three-pronged threat with which to attack this year's Tour.

In an unorthodox move, the team named their Tour squad in February, placing their three-leader strategy front and centre. Dumoulin told Cyclingnews that plan could possibly change now with the Tour set to be followed in quick succession by the Giro d'Italia and then the Vuelta a España.

"That's a question I cannot really answer, because I am not the one making the decisions," he said. "I guess the Tour is still the most important race for us as a team, and for cycling in general. We already made this whole general plan to go to the Tour with our top team, all the top riders together, and I can't really imagine that suddenly changing.

"We already spread our leaders little bit, like George Bennett going to the Giro and Steven Kruijswijk also going to the Vuelta," he said. "So maybe that will change a bit because there are now no Olympics anymore, and so maybe we could all do the Tour and the Vuelta, for example. But at the moment we don't know anything yet. It will take some time to start planning."