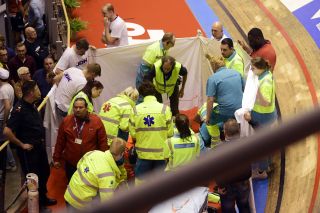 Gerben Thijssen is attended to by medics at the Gent Six Day (Image credit: Bettiin Photo)

Lotto Soudal rider Gerben Thijssen is in the intensive care in Belgium after crash at high speed on the opening night of the Gent Six Day and suffering three small areas of bleeding in the brain.

Thijssen crashed hard after contact with other riders late on Tuesday night. He remained motionless on the track immediately after the crash but reportedly never lost consciousness. After being treated in the velodrome, with staff hiding him from the packed crowd, Thijssen was taken to a Gent hospital by ambulance.

"He remained conscious at all times. Fortunately, his condition is stable, but he landed on his head and the hospital doctors diagnosed three small areas of bleeding in the brain after doing a scan.

"For that reason, they are keeping Gerben in intensive care for a few days. The coming days will be crucial for understanding how his condition evolves."

Earlier during the first evening of racing, Mark Cavendish also crashed at speed during the one-lap team time trial event, sliding out when he dropped onto the blue band on the inside of a steeply banked turn. Cavendish got up after a few moments and appeared to be okay but had to sit out the first Madison of the night.

After Thijssen's more serious fall, the other riders were in shock, and asked the organisers to end the racing shortly after 00:30.

"The public has dealt with that in a fantastic way," Maertens said. "The spectators applauded the decision."

'T Kuipke was the site of a fatality during the 2006 when Spaniard Isaac Galvez, the reigning world champion in the Madison with partner Joan Llaneras, crashed into the railing and died due to the impact to his heart on the fifth night. The organisers canceled the final day of racing.

Organisers said the second day of racing will continue on Wednesday as planned, with the teams in agreement after an update on the rider's condition.

Jules Hesters and Otto Vergaerde lead with 46 points after the first day. Kenny De Ketele and Robbe Ghys are second, trailing the leaders by just one point. Seven teams remain on the lead lap.