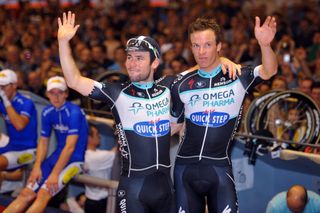 Mark Cavendish says he's on good form and will be aiming for the overall victory when he pairs up with hometown hero Iljo Keisse at the Gent Six Day that starts on Tuesday.

Cavendish first raced the event, which he calls "the Tour de France of track cycling", with Keisse in 2014 and is keen to put on a good showing.

"It's always special coming here to 't Kuipke [velodrome] in Gent. To me, it's the Tour de France of track cycling, so it's special," Cavendish told Sporza.

"It's even more special riding with the king [Keisse] again. When you're a kid, you dream of riding here. I never got to watch it until I rode the UIV Cup when I was an amateur, and I use to plead to stay afterwards to watch the pros."

Cavendish has had a tough few seasons while he suffered from the Epstein-Barr virus, but showed he is recovering well when he and partner Owain Doull took second at the London Six Day last month.

"I've got good form, I think. I'm happy with where I am. I've been training for this," he said.

"If I had a real hard season, I need a break and so it's hard to ride the track but with being sick and things; I didn't do the Tour de France, so I don't really need a break. I can carry on through to next year on the road. It's better to race than train and the opportunity to ride in Gent is something you don't let pass."

Cavendish arrived in Belgium last Thursday to reacquaint himself with the tight, 166-metre Gent track he last rode to victory on in 2016 with Bradley Wiggins.

"Riding a 166m [length] track is different. That's why I've come to Belgium early so we can train as much as possible in the next days.

"You've got to be professional. It's always the same, even when I'm in the best form of my life, the first two nights... The mental fatigue and stress gets you more tired than the actual legs. It's trying to process the information that comes so quickly – we lap in nine seconds. A lot of things happen on the track, and by the end of the night you just want to sleep."

The last time Cavendish raced the Gent Six Day with Keisse, the pair came second to Jasper De Buyst and Kenny De Ketele. He brushed off suggestions they would want to take revenge for the loss.

"At the end of the day, we wouldn't be here if we didn't want to win. We'll try our best. For me, this year has the strongest combination of pairings I've seen for a long time in Gent. There are normally two or three teams that can win, but it's going to be a much bigger fight than just four teams for the win. It doesn't make it easy, but we're not here just to ride around, that's for sure."