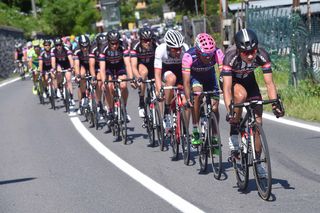 The UCI published a report Tuesday concerning its responsibility to tackle racism and ensure diversity in the sport of cycling. The report comes in the wake international Black Lives Matter protests that have erupted after George Floyd was killed by ex-police officer Derek Chauvin in Minneapolis, Minnesota, in May.

"Cycling is a universal activity, and we must continue our commitment to ensuring that it is similarly accessible at all levels and in all its forms across the globe. While the death of George Floyd has resulted in a wave of indignation worldwide, riders' testimonies explaining they have been subject to racism because they have black skin sends us a message concerning our responsibilities," the report read.

In the wake of Floyd's death and Black Lives Matter protests, some companies within the cycling industry have remained quiet. In contrast, others have taken to social media channels to release statements of support, expressed concern, and for some, have committed to action to improving diversity in the sport.

BikeCo., the North American distributor for Fuji Bicycles, issued a statement Sunday declaring that the sale of Fuji bikes to police forces has been suspended following numerous incidents in which bikes have been weaponised against protestors around the USA.

Specialized founder Mike Sinyard released a statement Tuesday that outlined the company's plans to encourage inclusion and diversity in cycling. He committed $10 million of additional funding to support change.

Such statements, however, reflect the broader issue of systemic racism within cycling.

In its report, the UCI cited its progress in improving diversity in cycling while reflecting on the sport's ties to western nations that have economic privilege.

"As an International Federation, what does the Union Cycliste Internationale (UCI) do to ensure diversity in cycling, an Olympic and Paralympic sport, but one which remains strongly tied to the West and is still predominantly practised in countries and by populations that are relatively economically privileged?" the report asked.

The UCI pointed to several strategies it has taken in recent years to address racism and support diversity. It began with its own Constitution that ensures, "equality between all the members and all the athletes, licence-holders and officials, without racial, political, religious, gender-related or other discrimination."

The UCI also pointed to its Code of Ethics, which was last updated in 2018, which includes the article. 6.1. Non-discrimination that states:

"The persons bound by the Code shall not undertake any action, use any denigrating words, or any other means, that offend the human dignity of a person or group of persons, on any grounds including but not limited to skin colour, race, religion, ethnic or social origin, political opinion, sexual orientation, disability or any other reason contrary to human dignity."

However, since the death of Floyd, black athletes have come forward to describe their experiences with racism in the sport, including French track sprinter and Olympic medallist Grégory Baugé.

There have been other cases of racial abuse within professional cycling, with one of the more recent cases that was reported on involving Kévin Reza in 2017. Reza's FDJ teammate Sebastian Reichenbach called out Gianni Moscon (then Team Sky) on Twitter for using racially abusive language toward Reza during Tour de Romandie.

The UCI, under president Brian Cookson at that time, launched an investigation into Team Sky and Moscon after the incident and elevated the case to the Disciplinary Commission. It ultimately decided to take no further action because Team Sky had suspended Moscon.

Reza also experienced racially abusive language from Michael Albasini (then Orica) when the two were part of a breakaway during a stage of the Tour de France in 2014. In a similar case, the year later, Branislau Samoilau was accused of being abusive toward MTN-Qhubeka's Natnael Berhane. It was reported that he was fined one month's wages by the CCC Polsat team, which donated the funds to the Qhubeka charity. In both cases, the UCI chose not to issue punishments because an apology and agreement were made between the riders and their teams.

World Cycling Centre provides opportunities for riders around the world

The UCI noted that "diversity is a reality" in cycling and its publication on Tuesday placed an emphasis on its efforts in the field of training and development towards less-resourced countries and regions, and its efforts to make the sport of cycling more global.

"Nevertheless, despite these figures, we know that not all nations are equally equipped to accompany riders to the highest level and enable them to reach a professional level in cycling. That is why the UCI steps in at the foundations, with young riders and people working in the sport," the statement read.

The UCI highlighted that its World Cycling Centre (WCC) has welcomed more than 2,200 athletes, along with coaches and people practising other cycling professions, from five continents between 2008 and 2018. Riders who have utilised support from the WCC programmes early in their careers include Trinidadian Teniel Campbell, who now races for Valcar-Travel & Service, and Eritrean Daniel Teklehaimanot, who raced for teams Cofidis and Dimension Data, along with Venezuelan BMX specialist Stefany Hernandez and Chinese track cycling specialist Guo Shuang.

"In total, 22 Olympic medals and 78 UCI World Champions can be attributed to the work of the UCI WCC and its five satellite centres throughout the world, such as that in Paarl, South Africa," read the UCI statement.

As part of its Agenda 2022, the sport governing body spent more than 2 million Swiss francs in support of 120 projects implemented by National Federations and Continental Confederations as part of the UCI Solidarity Programme. The programme was designed to support emerging cycling nations and promoting the sport to increase its popularity worldwide.

"Last year, the UCI allocated a global amount of 5 million Swiss francs for actions in favour of training and the development of cycling in the world. This budget is financed by the Olympic contribution received by the UCI – cycling is the third sport at the OG in terms of medal numbers – after each edition of the Olympic and Paralympic Games.

"This income enables the UCI to contribute to the diversity in our sport. So that cycling is open to everyone, regardless of their origins. Because the rainbow needs all its colours."